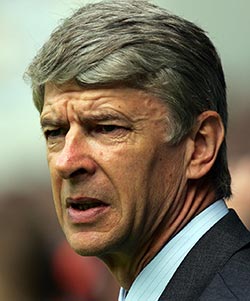 THE Gunners are in the market for some additional attacking cover following the season-ending knee injury to England forward Theo Walcott.
However, with Denmark forward Nicklas Bendtner set to return from an ankle injury to the squad for Friday night’s FA Cup fourth-round tie against Coventry and Yaya Sanogo also closing in on full match fitness, Wenger does not appear overly concerned about Arsenal’s attacking options.
Wenger was photographed at Heathrow Airport on Wednesday, sparking rumours of a dash to Europe to seal a transfer. However, Arsenal sources insist the manager was on a personal trip rather than setting off for a scouting mission.
Indeed, Wenger himself insisted at Thursday’s media conference suggestions he was watching Levante being beaten by Barcelona and keeping an eye on Cristian Tello were wide of the mark.
Nevertheless, Arsenal continue to be linked with Schalke’s Germany international Julian Draxler and also Mirko Vucinic of Juventus, the Montenegro forward.
Wenger, though, stressed he had not yet lined up any bids.
“Unfortunately no. I feel a bit guilty always going to a press conference during the transfer market and having nobody to announce, but I don’t want to lie,” the Arsenal manager said.
“It (new signings) looks very unlikely. We are 23rd January today and at the moment I must say we are not close to doing anything.”
Other clubs may be making moves this January, with Manchester United looking set to sign Juan Mata from Chelsea, who have already brought Serbia midfielder Nemanja Matic back from Benfica in a £21million deal.
However, Wenger feels just bringing in new faces does not necessarily make the squad stronger.
“We have just had (Alex) Oxlade-Chamberlain back, Bendtner back, I hope to have (Mikel) Arteta back next week and (Aaron) Ramsey. Overall I feel we have the needed squad,” the Arsenal manager said.
“We also have Yaya Sanogo coming back into the squad next week as well.
“Overall we have a very strong squad. If something exceptional turns up we will do it, but not everyone will strengthen – they buy, but that does not always mean strengthen.”
Wenger confirmed he intended to use a strong squad against the League One side, with Arsenal’s next Premier League match not until Tuesday night.Advertisement

Czech midfielder Thomas Rosicky, though, will not be involved following his broken nose against Aston Villa, which has seen him train in a protective mask.