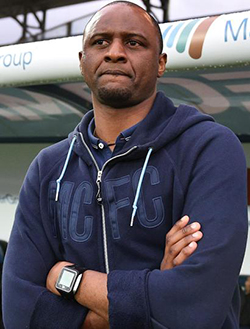 ARSENAL manager Arsene Wenger believes Patrick Vieira has the credentials to become a successful manager as rumours about the Manchester City job persist.
But the Gunners boss thinks Manchester City already have a man of “super” calibre in their top job in Manuel Pellegrini.
Vieira, one of Wenger’s most influential former Gunners captains, is currently the manager of City’s elite development squad.
Recent speculation over Pellegrini’s future has seen the Frenchman mentioned as a potential successor to the Chilean at the Etihad Stadium.
Wenger was asked about this possibility at his latest press conference but, while backing Vieira’s ability, did not want to be drawn into the matter.
Wenger said of Vieira: “I believe like many other players he has the intelligence and the competence to do this job, but I believe that Pellegrini is of super-competence and super-quality as well – so if you want me to interfere in that, I am not ready to do it.”
Pellegrini’s position has come under scrutiny as City have collapsed in the Barclays Premier League title race in the second half of the season.
The defending champions were joint top in January but are now fourth after a dismal three months in which they also went out of the Champions League and FA Cup.
A host of names have been linked with Pellegrini’s job – also including Pep Guardiola, Diego Simeone, Jurgen Klopp, Carlo Ancelotti and Rafael Benitez – but City have given no indication they are considering a change.
What is in little doubt, however, is the club’s high regard for Vieira.
Since retiring as a player in 2011, the 38-year-old has been a key staff member at City, first in an administrative role and then as boss of the second string. He is regarded as first-team management material in the future.
It is suggested the bigger clubs are now generally unwilling to give opportunities to younger coaches due to the pressure for success at the top level.
Wenger believes the competition at the top end has become more intense.
He said: “The media pressure is maybe bigger than a few years ago but the problem is still the same.
“In the big clubs, you have to have a good record to win your games, but as well you have better players to do it.
“Maybe what has changed is the competition in England is bigger and you have six or seven clubs who can fight at the start of every season to win it. That means five or six will be very sad at the end of the season.”Advertisement