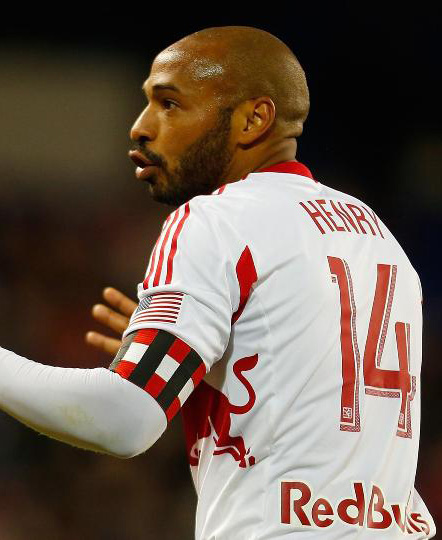 ARSENAL boss Arsene Wenger feels Thierry Henry’s biggest challenge to becoming a successful manager will be the realisation that nothing else in life matters apart from the job.
Henry confirmed on Monday he will leave the New York Red Bulls after four-and-a-half years with the Major League Soccer franchise, prompting speculation over a return to the Premier League club.
Wenger believes Henry, the Gunners’ record goalscorer, will always be “an Arsenal man”, having trained at their Hertfordshire base before a brief loan spell during January 2012.
The Gunners boss would welcome some sort of role for Henry with them again in the future, although the exact nature will be down to the 37-year-old following a period of reflection.
“Being a manager is a different job, but it is dedication. In this job, it is a dedication of your life. You have to realise there is nothing else (other) than that,” said Wenger, who is now the longest-serving manager in the top flight.
“If you look around me, people who have worked without interruption for 30 years in this job, you will not find many.”
”Thierry is intelligent, committed, he loves the game. He just has to think, ‘Do I want to sacrifice all the rest of my life to be involved in that job?”
Wenger added: ”Thierry is an Arsenal man. The best moment certainly of his life and of his career has been experienced here.
”Certainly one day he will come back here. In what role I don’t know, that is what he has to think about: what direction he wants to give to his next life.”
Wenger feels having ex-Arsenal men on the bench can be positive, but only in the right balance.
He said: “(Assistant Arsenal manager) Steve Bould is one of my ex-players, before I had Pat Rice.
“I think it is important to have a staff (who are former players at the club), but as well not too many, there is a right number.”
Wenger remains unconvinced Henry has the appetite to continue his playing career, although believes the World Cup winner has some unfinished business with the French national team, amid suggestions the veteran would be offered an honorary international cap for a potential friendly against Brazil in 2016.
“I think that is the minimum the French (Football) Federation can do. After what happened with (Republic of) Ireland in the (2010 World Cup) qualifiers, the situation was not handled too well by the federation,” Wenger said.Advertisement

“I don’t think the feeling between Henry and the (French) federation was good at the time and I think they owe him that. I hope he will get that, and get the honour he deserves.”