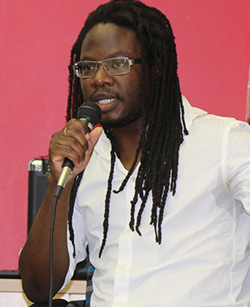 WITH no formal training school in the field; arts managers say it has been a struggle to lure Zimbabwean audiences to their various art forms.
Impressed by the reported successes of religious leaders locally and their counterparts in the West and other parts of Africa such as Nigeria and South Africa, budding arts managers shared their thoughts on what is the beginning of a journey towards formalising the field of art management at a recent Food-For-Thought discussion session held at the United States Embassy’s Eastgate offices in Harare.
The discussion, facilitated by Plot Mhako of Jibilika Arts Trust and Mandela Washington Fellowship program alumnus, was moderated by social entrepreneur and 263AfricaTV founder, Nico Abote.
Abote, who has overseen the successful hosting of the Zimbabwe Music Awards (ZIMA) and the Anne Kansiime Stand Up show in the past two years used the success of local religious leaders like Emmanuel Makandiwa of United Family International Church and Walter Magaya of Prophetic Healing and Deliverance Ministries in luring huge audiences to their sermons.
“Locally, audiences do not appreciate our products that much,” noted Abote. “We seem to struggle to get to platforms other artists from other countries are getting into.”
“This argument is a bit misplaced,” responded Marcus Gora, manager for award-winning band Mokoomba from Victoria Falls and co-founder and director of First Floor Gallery Harare, a space that supports emerging and established international visual artists.
“The story of Mokoomba is that they have based their art form on traditional songs; people say we are known more outside than inside—that’s the reality, Zimbabwe is known more by outsiders than locals.”
Gora, who is currently working on projects and products aimed at discovering, developing, and delivering-to-market the best local emerging talent in arts, culture, and design said the Zimbabwean market is small.
He added: “As artists we shouldn’t be worried about that as a limitation. Arts management is only popping up now and exposure is the education.”
Among the panel was mbira maestro Hope Masike, recently nominated for a KORA award. She says Zimbabwe does not consume different types of music per given time.
“The audience does not appreciate music that they have not heard on radio. It’s all of us are to blame for that —the audience and the artists. We need to get variety.”Advertisement

She chronicled her challenges trying to get Zimbabweans to support her after her KORA award nomination.
“Nigeria dominates Kora because they are big,” she said.
She hailed local newspapers for their support noting the daily posters in the local H Metro newspaper in the past week.
“But it could be more national,” she said.
“It takes much effort for Zimbabwe to be well known. I have been following other nominees’ campaign. We are a bit slow here, but when we catch up it becomes like fire.”
Another budding arts manager, Phineas Mushayi, who has been working to promote dancehall music, said currently “the music genre comes from the street and has neither structure nor strategy.
“Management does not exist,” noted the organizer of the Zim dancehall awards.
He said through his work they have forged a partnership with the artists for progressive social messages, a big shift from the previous lurid musical style when most dancehall artists started.
“There was so much chaos and hence the need to bring in sanity,” remarked Mushayi.
He drew laughter from the audience when he said Zim dancehall artists are making more money than other professionals.
“Look, it’s just the artist and the deejay; they perform in halls on a frequent basis and they gross more money than a teacher by the end of the week.”
He said, “Each market has its context and we can’t compare ourselves with foreign artists who drive luxury vehicles.”
The discussants noted that there was little time devoted to the art product development.
“We have become a microwave society; we want things so quickly. We don’t mind about quality. And we have created gullible audiences,” said Mhako.
“In the end we hero worship ourselves, we celebrate mediocrity, and we are too comfortable. 35 years without alternative television stations has seen us dedicate so much time on foreign content.”
The panelists said local industry was not investing in the development of upcoming artists, which is exacerbated by representatives of corporations who have no clue about what role they can play in the development and promotion of art.
Gora noted, “I have knocked on so many doors and the person you meet in companies has no clue. The marketing manager does not know anything about art apart from road shows.”
He called on corporates to engage as partners rather than using artists to push a brand.
“There has to be balance between the authenticity of the artist and the product,” said Gora.
The discussion is the first in a series of discussion sessions to assist budding artists and arts managers understand various processes of marketing, said Mhako.
A journalism graduate, Mhako admitted that much of the success of Jibilika was a result of exchange and residency programs in the United States and other countries.