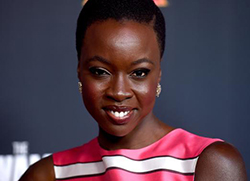 THE Walking Dead fans have known her as badass Michonne since she joined the AMC show’s third season in 2012, but Danai Gurira was an important, emerging playwright even prior to her television stardom. Although born in the U.S. to parents from then-Rhodesia, Gurira returned to the new nation of Zimbabwe at a young age.
And it is Africa—the voice of African women specifically—that fuels her plays. Eclipsed, her best-known creation to date, about Liberian women during the war there—is currently on Broadway and has generated lots of attention, largely because of Oscar winner Lupita Nyong’o’s role in the bold work. The Rootcaught up with Gurira to talk Eclipsed, Lupita, creating opportunities for other African actresses, playing Afeni Shakur in the Tupac biopic, what attracted her to Michonne and her off-Broadway play, Familiar.
The Root: When did you develop Eclipsed and why?
Danai Gurira: I started writing Eclipsed in, like, 2008. All my plays are about women on the [African] continent or women from the continent. So this was a subject that [matched] my artistic mandate, which is about giving voice to African women through my work. … I was in grad school, and [there] was an article in the New York Times about women who were rebel fighters during the Liberian War … and I had just never seen an image of African women that looked like that. … little cute jeans and pumps and really cute hairdos, but AK-47s on their backs; very formidable women of war.
I had grown up in southern Africa, but I had never seen anything like that because I was not anywhere near western Africa, where this was happening. I was very much about celebrating the specificity of the continent, so I wanted to learn more about those African women, which led me to go to Liberia, do a lot of research and meet women, learn a lot, and create the narrative that ended up being Eclipsed.
TR:How did Lupita get involved?Advertisement