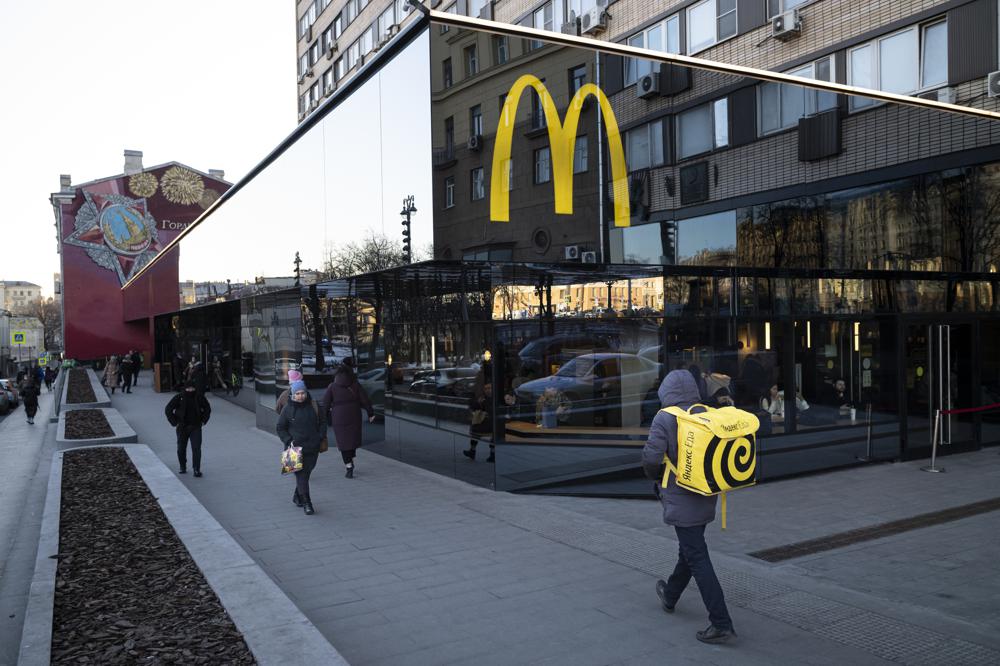 THE “Evropeisky” mall in Moscow was once a symbol of a Russia integrated into the global consumer economy, with atriums named after cities like London, Paris and Rome.

But now large parts of the seven-story shopping center have gone quiet after Western brands from Apple to Victoria’s Secret closed their Russian operations in the two weeks since the country invaded Ukraine.

Hundreds of companies have similarly announced plans to curtail ties to Russia, with the pace accelerating over the past week as the deadly violence and humanitarian crisis in Ukraine worsens, and as Western governments ratchet up economic sanctions.

Russian President Vladimir Putin responded Thursday by saying that if foreign companies shut down production in Russia, he favored a plan to “bring in outside management and then transfer these companies to those who want to work.”

A draft law could allow Russian courts to appoint external administrators for companies that cease operations and are at least 25% foreign-owned. If the owners refuse to resume operations or to sell, the company’s shares could be auctioned off, the ruling United Russia party has said, calling it “the first step toward nationalization.”

Chris Weafer of Macro-Advisory, a consultancy specializing in Russia, said the Russian government “is adopting a carrot-and-stick approach to foreign business,” with talk of nationalization balanced out with government help for those who stay. A key reason, Weafer said, is the Kremlin’s desire to avoid mass unemployment.

White House press secretary Jen Psaki criticized “any lawless decision by Russia to seize the assets of these companies,” saying that it “will ultimately result in even more economic pain for Russia.”

“It will compound the clear message to the global business community that Russia is not a safe place to invest and do business,” she said in a tweet, adding that ”Russia may also invite legal claims from companies whose property is seized.”

Even before its invasion of Ukraine, Russia was already trying to domesticize its food supply following sanctions it had placed on the European Union in 2014. With little to no fresh food imported from those trading partners, Russia put greater focus on domestic food and importing from friendlier countries like Turkey.

Companies like French foods giant Danone, which is suspending capital investment in Russia but continuing production there, are “essentially Russian companies” with local staff and supply chains and can function more or less autonomously of the foreign owners, Weafer said.

But keeping businesses operating in Russia — even with government intervention — will not be easy. That’s because the conditions that led foreign companies to leave Russia are still in place: international sanctions, disruption to the supply chain and pressure from customers in Europe and North America.

The auto industry has been particularly hard hit by its reliance on foreign-made electronics. Even companies that have stayed in Russia like French carmaker Renault, the majority owner of Russian producer Avtovaz, have had to suspend production temporarily.

Without imports, businesses like furniture maker Ikea or many fashion retailers can’t function, and will likely have to leave the Russian market altogether, Weafer said.

Some foreign companies suspending their Russian operations, like McDonald’s and cigarette producer Imperial Brands, have made a point of saying they will continue to pay staff even while their workplaces are closed. That can’t last forever, and Weafer predicts companies will need to decide by the end of summer whether to resume operations or leave entirely.

One voice pushing back against confiscating foreign firms’ assets is billionaire metals tycoon Vladimir Potanin, who compared it to the Russian Revolution of 1917, when Communists took power.

“It would set us back 100 years to 1917 and the consequences of a step like this one — global distrust in Russia by investors — would be felt by us for many decades,” he said in a statement Thursday on the social media of his company, Nornickel.