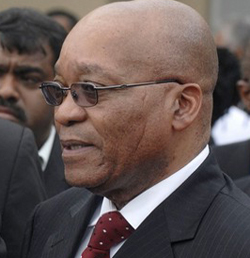 UNTIL recently, South Africa laid claim to the title of Africa`s biggest economy, being the beacon of its former President Thabo Mbeki`s vision of an African renaissance. But two decades post-independence, the rainbow nation is at a precipice. Unemployment, particularly amongst the youths is high, service delivery has been a major bone of contention, and labour unrests in the mining sector – an integral component of its economy – have been prevalent. As the national elections draw close, perhaps the most seminal issue at hand is that of ownership of resources and transformation of the economy to include the previously disenfranchised South Africans.
The issue of resource ownership has never been more relevant as it is today to the ordinary South African. It is apparent that the means of production have remained in the hands of the minority, and the country is a reflection of the chasm between those living in plenty, and those barely getting by. Contrasts between Alexandra township – decked with ramshackle structures – and its neighbour, Africa`s richest square mile, the glitzy Sandton  adorned with structures resembling those in developed economies, have probably been the most quoted example in highlighting the socio-economic disparities in the country.
Under the stewardship of the African National Congress (ANC), South Africa`s GDP Per Capita (an indicator of a country’s standard of living) has grown by close to 33 percent since 1994 to around $7,508 today. Official statistics reveal that nearly 5 million more people are now employed than in 1994 at independence. Efforts have been made by the liberation movement to provide education for all, with the ANC boasting that because of its policies, twice as many youths attended university in 2012 compared to 1994.  Massive infrastructure development programmes and social welfare spending initiatives have been spearheaded by the party over the years. It would appear then that the successive ANC-led governments have done reasonably well in transforming the rainbow nation from its apartheid marred past into the vibrant democracy it is today.
For many however, the dawn of a new era promised in 1994 remains a flight of fancy as many still reel in abject poverty and squalor. A report released by the United Nations Development Programme (UNDP) revealed that at least 25 percent of South Africans still live below the poverty datum line, although the proportion of people living on less than $2 a day fell from 12 percent to 5 percent between 1996 and 2010. Unemployment remains a major hurdle with close to quarter of the population said to be unemployed, although this number increases to north of 40 percent if a broader definition of unemployment to include those who have stopped looking for jobs is considered. There is some truth to the ANC`s mantra of declaring how they have lifted many out of poverty since the establishment of black majority rule, however the simmering tensions over poor service delivery, corruption and economic inequalities paint a picture of growing public discontent with the ANC government.Advertisement

With the ANC having consistently garnered over 60 percent of the votes in previous national elections, there hasn`t been any real threat to its hold on power. In the 2009 elections, the Democratic Alliance, South Africa`s main opposition party only managed 17 percent of the vote, further giving credence to the point that, until now, there has been no real opposition to the ANC. In my mind however, that is up till the emergence of the Economic Freedom Fighters (EFF) led by the erstwhile ANC gunslinger Julius Malema whose radicalism on issues such as nationalisation of mines and the expropriation of land without compensation sent many tongues wagging within the ruling ANC party.
The EFF seeks to capitalise on the general public frustration with the ANC that the neo-liberal economic policies it has advanced post 1994 have done little if anything to reverse the wrongs created by the apartheid system. The general feeling among many, especially the black working class, is that the ANC has abandoned the ideals of the Freedom Charter, and has pursued policies which engrain a capitalist system not unlike the one existent during colonialism. This has led to the once formidable tripartite alliance between the ANC, South African Communist Party (SACP) and the Congress of South African Trade Unions (COSATU) weakening over the years.
In fact, the National Union of Metalworkers of South Africa (NUMSA), an affiliate of the COSATU, unanimously passed a Special Congress resolution to stop supporting the ANC in the forthcoming 2014 elections. General Secretary of NUMSA, Irvin Jim, commenting on the resolution, said, “The ANC led government continues to ignore and duck the question of how to fundamentally change property relations in the country.” Julius Malema`s EFF could potentially offer abode to the 338,000 strong NUMSA membership because of its left-leaning political ideology.
The ANC appears to have skirted around the volatile issues of resource ownership and land reform as it sought to avoid scaring away foreign capital which has been oiling South Africa`s economic engine since independence when most financial sanctions were lifted. This has meant that these crucial issues have never been adequately addressed. Sensing the frustrations regarding economic transformation, the ANC introduced the Black Economic Empowerment (BEE) programme in a bid to placate the masses, one may conclude. However, the success of this policy is very much subjective! Economic commentator, Moeletsi Mbeki sees this policy as a form of “legalised theft” that has only succeeded in creating a class of a few black elites looting State resources and co-opting the economic system in their favour. This black elites are now popularly referred to as “tenderpreneurs”.
Now at hand is the fact that the EFF`s policy agenda resonates with many of the black working class who have had to endure years of the ANC`s ‘frozen politics’. Clearly Julius Malema is able to conjure up emotion in people and, in the past, has displayed the uncanny ability to drum up support for the causes that matter to him, the ouster of former President Thabo Mbeki being a case in point.
Malema has nailed his colours to the mast! If elected, his party proposes State-led, protected industrial development and diversification. This would entail state control and ownership of the Reserve Bank, 60 percent of both mines and banks being held by the state, and at least half of the country`s mineral resources remaining “on-shore” for local beneficiation. Furthermore, his party would introduce a minimum wage of R4,500 across the board, increase salaries of civil servants by 50 percent, ban labour brokers, and make all workers in mining and agriculture permanent. An education tax would be imposed on all corporations to fund education training programmes. These are some of the underlining tenets of the EFF`s socialist philosophy of a “people driven state”.
The ANC has an audited membership of over 1,2 million people and in January, the EFF announced they had 400,000 paid-up members with the objective of pushing that number upwards to 500,000 by the time elections were conducted. If these figures are to be trusted, then the EFF has a significant support base for a party its age. To deny that the EFF indeed has an audience for its message would be akin to denying that the sun rises from the east.
However, questions still remain as to the efficacy of the EFF`s policies. Beyond their drive to nationalise farms, mines and expropriate land, then what? Is their vision for South Africa forward-looking enough past nationalisation to ensure continued development? How exactly do they create the jobs they promise? Others feel that, should they push forward with their proposed land redistribution exercise, they risk creating a ‘Zimbabwe version 2.0’ as one commentator puts it. It is not clear if they have the necessary capabilities to drive an economic powerhouse like South Africa. Then there is the issue of Malema`s somewhat curt character and whether he has the tact to be a statesman.
While it is difficult to envisage the ANC losing the May 7 election, it is also hard to imagine them amassing the 60 percent majority they have become accustomed to. With some ANC stalwarts in the form of Trevor Manuel and Pallo Jordan publicly criticizing President Zuma for his excesses and others like former intelligence minister Ronnie Kasrils launching a spoilt vote campaign in protest against the ANC, clearly the ruling party is at a crossroads. Now as voters get ready to cast their ballots, should they not vote for the ANC, is the newly formed socialist leaning EFF a sober choice to usher South Africa into a new era of transformation and economic development, the question begs.