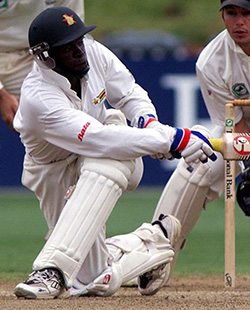 IT WAS the demise of an unfulfilled dream, and to see a bright future snuffed out like that is always awfully painful.
Almost a decade and a half later, the passage of time has done little to ease the pain.
In June this year, 15 years would have passed since the death of Trevor Madondo, the first black Zimbabwean cricketer to be capped by the country as a specialist batsman.
When Madondo walked in to bat in his Test match debut against Pakistan in Bulawayo in 1998, young Temba Bavuma who, only 13 months ago, would achieve a similar milestone for his country, South Africa, was a tiny eight-year-old boy growing up in the black township of Langa, Cape Town.
In December 2014, Bavuma went into the history books by becoming the first black South African batsman to play Test cricket, 17 years after the legendary bowler Makhaya Ntini was the first ever black cricketer altogether to represent the country and 25 years after the arrival of democracy in 1990, interestingly the year Bavuma was born.
Almost exactly a year after earning his first Test cap, Bavuma would write another piece of history. Batting at number six in the second Test against England last week, the diminutive 25-year-old notched up a delightful maiden century, the first black South African cricketer to do so.
Like many other black South African cricketers before him, Bavuma had to be content with the unwanted tag of affirmative action beneficiary, a token selection aimed at striking a racial balance and quieting down growing political voices demanding quicker transformation pace in a game and country often plagued by race issues.
Good sportsmen answer critics with performance, and Bavuma could not have chosen a better platform and better place to do so; at Newlands in Cape Town, his hometown, with a glorious hundred against the touring Poms – a feat decorated with emotion and sentiment and one sure to change attitudes towards not only black batters, but players of colour in general.
A pioneering black batsman
While Zimbabwean cricket lovers were joining South Africa and the cricketing world in hailing the arrival of a new hero, it would not have escaped a lot of them that our own version of Bavuma, perhaps even more talented, was so brutally taken from our midst by the powerful hand of fate.Advertisement

Trevor Nyasha Madondo succumbed to a bout of cerebral malaria at Parirenyatwa Hospital in June 2001 aged just 24, becoming one of the youngest Test cricketers in the world to die.
The Madondos hail from Mutare, but the family was always on the move due to their father’s job as an Agritex extension officer. So young Trevor was born in Mount Darwin and sent to prestigious boarding schools at Lilfordia Junior outside Harare and later Falcon College in Matabeleland.
It was at Lilfordia, a sports nursery in its own right, where the seed of cricket was planted. Headmaster Iain Campbell and wife Letitia, proprietors of the school, are respected cricket devotees in the country. Iain Campbell gave himself the extra role of cricket coach, nurturing future Zimbabwe stars like Brendan Taylor, Malcolm Waller and Madondo himself.
It is fitting then that Alistair Campbell, son of Iain and Letitia, would be Zimbabwe’s captain when Madondo made his Test debut.
“I had known Trevor since he was very young,” says Campbell. “He went to our school, Lilfordia, and then Falcon. He had the best upbringing as a cricketer. It was an unfortunate tragedy that he died so young. It’s devastating when a young life is taken, especially one so gifted. It makes you numb. It takes time to sink in.
“I also knew his dad very well, Mr Madondo. I went to the funeral and his dad was so overcome with grief. I remember the (body) viewing. He was dressed in his Test kit and Test cap. It showed how much his cricket career meant to his family.”
To say Madondo possessed genuine talent would probably be an understatement. He was a special kid, a stylish batsman who possessed all shots. At Lifordia and Falcon, he had plundered a glut of runs and word started spreading in the 90s of a certain black youngster who could wield the willow with subtle strength and natural ability. At club level for Old Miltonians and Old Hararians, he would slaughter many a bowler every weekend, a lot of them established internationals.
Disciplinary issues
But he had somewhat of a chequered disciplinary record and earned himself a reputation as a maverick and heavy drinker, which probably cost him a consistent run of games in the national side.

“He was very talented, he had ability to score runs at the top level,” adds Campbell.
“But unfortunately he lacked discipline. But talk to me about a very good cricketer; talk to me about a very good batsman, and Trevor was that. But he was greatly distracted by his off-field demanour.”
Serious cricket took a back seat when Madondo, upon leaving school in 1995, enrolled at Rhodes University in South Africa for a Bachelor of Commerce degree.
Those who knew Madondo intimately speak of a jovial and fun-loving young man who was loved by many and had an amazing way with people, but it was also clear that his behaviour at times was quite out of the ordinary – like when he injured himself at university after jumping to the ground from the balcony of his third floor dorm when a surplus of hops started to have effects.
But Darlington Matambanadzo, a childhood friend and former junior cricket teammate, insists Madondo’s reputation as a party animal was unfair.
“Very few people are not wild at 19, 20, 21,” says Matambanadzo.
“Well, we never saw the wilder side of Henry Olonga because he wasn’t in our circle. Or someone like, say, Dirk Viljoen.
“A lot of the players at that time were guys who showed their wilder ways. Guys like Murray Goodwin, Neil Johnson, they liked to have a good time away from the game.
“People thought Trevor was chronically irresponsible. No. He was very focused and he worked hard. Cricketers work hard, but there is also the opportunity to enjoy yourself. Yes, he drank, sometimes to excess. But I don’t think he drank more than everyone.”
The early days