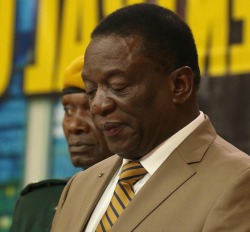 Busisa Moyo can’t wait to get out the door. It’s the middle of a Monday afternoon, and the chief executive officer of Zimbabwe’s United Refineries Ltd. is striding briskly out of his crushing plant—a vast rectangular structure with red brick walls and a corrugated metal roof. In theory, this is where millions of soybeans at a time can be cleaned, heated, cracked, and pulverized to extract vegetable oil. Except today, like most days, there are no soybeans and no workers; overhead, the steel catwalks are empty, and the line is silent apart from the clatter of Moyo’s footsteps on concrete. “I don’t like to be in there too long when it’s not running,” he says. “When you’re a factory man, you want to hear the machines pounding.”
Trim, 42, and dressed plant-manager casual in gray chinos and a short-sleeved button-down, Moyo exits into the pounding sunlight of Bulawayo, a decaying industrial city in southwest Zimbabwe. Since 2012 he’s kept United Refineries afloat in one of the world’s most unstable economies. Hyperinflation, corruption, and dereliction were hallmarks of President Robert Mugabe’s reign—which ended with the 93-year-old dictator’s sudden ouster in late November. Now, for the first time in almost four decades, Moyo and other Zimbabweans are daring to hope that their profoundly dysfunctional country can repair itself.
More pressingly, though, Moyo has to solve a money problem that persists into the post-Mugabe era. It’s not that he’s broke—United Refineries has more than enough in the bank to pay for a trainload of soybeans awaiting release across the border in Zambia. The issue is liquidity. Attempts to curb inflation have restricted companies’ access to their funds, and Moyo’s ability to import is determined weekly by a committee convened by Zimbabwe’s central bank. “The most nail-biting moments of my life are from Monday morning”—when Moyo makes his request—“until Wednesday,” when the committee’s decision is communicated, he says. Sometimes United Refineries is allowed to use $350,000; sometimes it’s as little as $200,000, with no apparent logic given. Moyo scrambles to allocate the funds as best he can to keep some part of the refinery operation going, and its workers in their jobs, until the nail-biting begins again. “I believe there are immense opportunities here,” Moyo says of Zimbabwe, where he’s remained after two of his three siblings, like millions of their fellow citizens rich and poor, left years ago for a more normal life abroad. “But a lot of the time I’m like, ‘Why do I put up with this rubbish?’ ”Advertisement