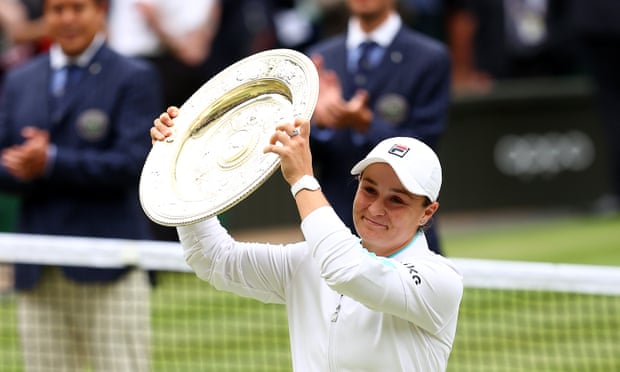 Ashleigh Barty, the world No. 1, is the 2021 Wimbledon champion. She defeated No. 8 seed Karolína Plíšková in three sets, 6-3, 6-7 (4-7), 6-3 on Saturday in the women’s final in London. It’s Barty’s second career Grand Slam singles title, with the other being the 2019 French Open. It marks the fourth year the Venus Rosewater Dish has been bestowed to a first-time Wimbledon winner at the All England Club.

“This is incredible,” Barty said in her post-match interview on the court. “I genuinely have to thank every single person in this stadium, you have made my dream so special, so thank you so much.”

Both Plíšková, 29, and Barty, 25, were playing in their first Wimbledon women’s final. Barty is the first No. 1 seed to win Wimbledon since Serena Williams won as the top seed in 2016. She is also the first Australian woman to win the Championship since Evonne Goolagong Cawley defeated compatriot Margaret Court in 1980.

Barty jumped out to a fast start to grab hold of momentum early on in the match, dominating the first set with 12 winners and two aces. Plíšková did not win a single point in the first three games before a double-fault on breakpoint handed Barty the 4-0 lead in the opening set.

The third set was similar to the first in Barty dominating. She jumped out to a 3-0 lead and held her serve the rest of the way to win her second Grand Slam and first Wimbledon championship.

Barty entered the final as the top-ranked player on the planet and defeated Angelique Kerber in the semifinals. While no road to a Grand Slam final is easy, Kerber was one of just two seeded players Barty met during the fortnight — she also toppled No. 14 Barbora Krejčíková (2021 French Open winner) in the fourth round.

Plíšková also saw mostly unseeded opponents, but did take out No. 2 Aryna Sabalenka in the semifinals to reach her first Grand Slam final since falling to Kerber in the 2016 US Open.

Several top players, including Naomi Osaka and Simona Halep did not participate in this year’s event while Serena Williams withdrew during her first-round match because of an ankle injury.