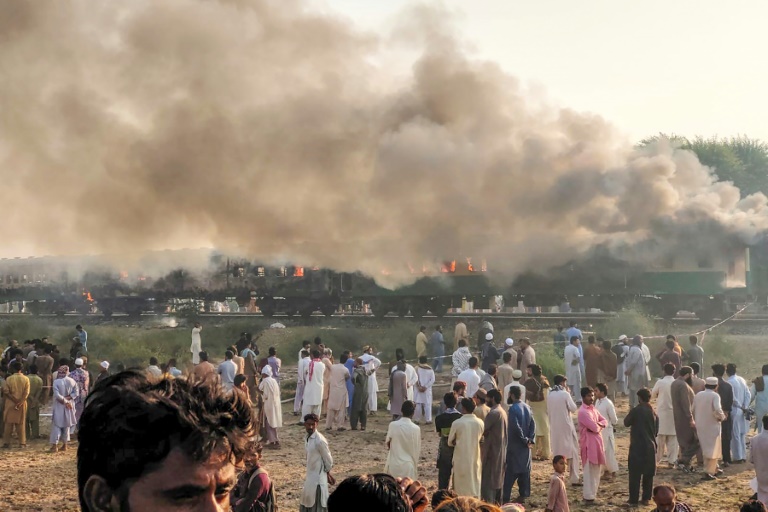 Some of the passengers -- many of whom were religious pilgrims travelling to a congregation in the eastern city of Lahore -- had been cooking breakfast when two of their gas cylinders exploded, officials said
Spread This News

At least 71 people were killed and dozens injured after cooking gas cylinders exploded on a train packed with pilgrims in Pakistan on Thursday, some dying after leaping from carriages to escape the inferno, authorities said.

Television footage showed flames pouring out of three carriages as people could be heard crying during the incident, in a rural area of central Punjab province.

Some of the passengers  many of whom were pilgrims travelling to one of Pakistan’s biggest annual religious gatherings  had been cooking breakfast when two of their gas cylinders exploded, Ali Nawaz, a senior Pakistan Railways official, told AFP.

Many Pakistanis carry food on long train journeys, but gas cylinders are banned, and Nawaz said an inquiry had been ordered.

Dozens of people crowded along the tracks staring at the burning carriages, which had been disconnected from the rest of the train, television images showed.

Firefighters rushed to the scene near Rahim Yar Khan district, extinguishing the blaze. Rescue workers and the army could also be seen, as bodies were carried away covered in white sheets.

Muhammad Nadeem Zia, a medical superintendent at the hospital in Liaquatpur, the nearest town, told AFP 71 people had been killed and 44 wounded.

A rescue services official for the district, Adnan Shabir, gave a slightly higher toll of 73 dead.

Zia said that some of the victims were killed by head injuries sustained as they leapt from the moving train.

The wounded were being rushed to hospitals in the nearby city of Bahawalpur and elsewhere in Rahim Yar Khan district. Officials said many of the bodies were charred beyond recognition.

“Deeply saddened by the terrible tragedy… My condolences go to the victim’s families & prayers for the speedy recovery of the injured,” tweeted Prime Minister Imran Khan.
“I have ordered an immediate inquiry to be completed on an urgent basis.”