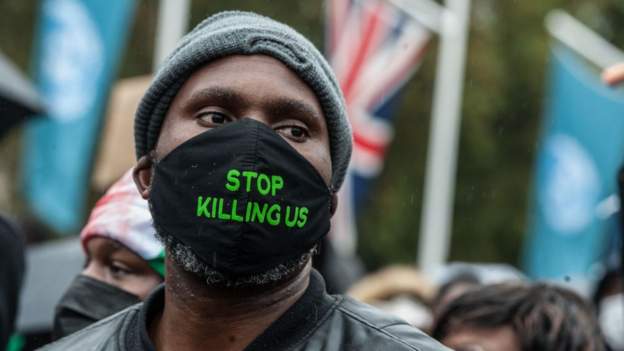 THE African Union (AU) has “strongly condemned” the violence against anti-police brutality protesters in Nigeria.

The Chairperson of the AU Commission, Moussa Faki, urged both “political and social actors” to “respect human rights and the rule of law”.

He hailed the disbandment of the hated Special Anti-Robbery Squad (Sars) and encouraged investigations to ensure “perpetrators of acts of violence are held to account”.

The regional bloc, the Economic Community of West African States (Ecowas), called for dialogue between the Nigerian government and the protesters.

Ecowas urged both parties to exercise restraint as protests continue.

“In this regard, the Ecowas commission calls on all protesters to remain peaceful in the conduct of their demonstrations. It also urges the Nigerian security operatives to exercise restraint in the handling of the protests and act professionally,” a statement read.

Rights group Amnesty International said at least 12 people were killed by soldiers and police in Lagos on Tuesday, although Nigeria’s army has dismissed the reports as “fake news”.

We had reports earlier that there were gunshots and smoke coming from an area close to a prison in Nigeria’s largest city Lagos.

A BBC reporter who went to the scene in Ikoyi says the situation is now calm.

Kenya’s former Prime Minister and opposition leader Raila Odinga has said there “can be no excuse” for the targeting of unarmed civilians in Nigeria.

His comments come after the shooting of protesters in the commercial hub, Lagos, on Tuesday. Rights groups have blamed soldiers, but the army has denied any involvement.

“The brutality meted out on protesting civilians is a sad reminder of how precarious and threatened Africa’s march towards democratisation… remains,” Mr Odinga said in a statement.

The African Union, the Commonwealth and the US have all condemned the violence.

Nigerian President Muhammadu Buhari has been holding talks with his defence chiefs as unrest continues in the wake of the shooting of protesters in Lagos on Tuesday.

He’s been chairing a meeting of Nigeria’s national security council in Abuja.

Mr Buhari has yet to comment directly on the violence earlier this week, in which troops are accused of killing about a dozen people in the suburb of Lekki. The army has denied involvement in the killings.

In the wake of the shooting, violence broke out in other parts of the city.

Gunshots have been heard coming from nearby a prison in the Ikoyi neighbourhood of Lagos, the Reuters news agency is quoting an eyewitness as saying.

A journalist for the AFP news agency is saying that the gunshots are coming from within the prison.

Smoke is also billowing up from the area.

AFP reports that the police said the prison had been attacked.

US condemns ‘soldiers firing on protesters’

The US has condemned “military forces firing on unarmed protesters in Lagos”, Secretary of State Mike Pompeo has tweeted using the #EndSARS hashtag.

The Nigerian military has denied that it was involved in the shooting of protesters in Nigeria’s largest city on Tuesday.

“Those involved should be held to account under the law. We extend our condolences to the victims of the violence and their families,” Mr Pompeon added.

Earlier, Nigeria’s Vice-President Yemi Osinbajo said there would be justice for the victims of the shooting, but did not confirm that anyone had died or who was behind the incident.