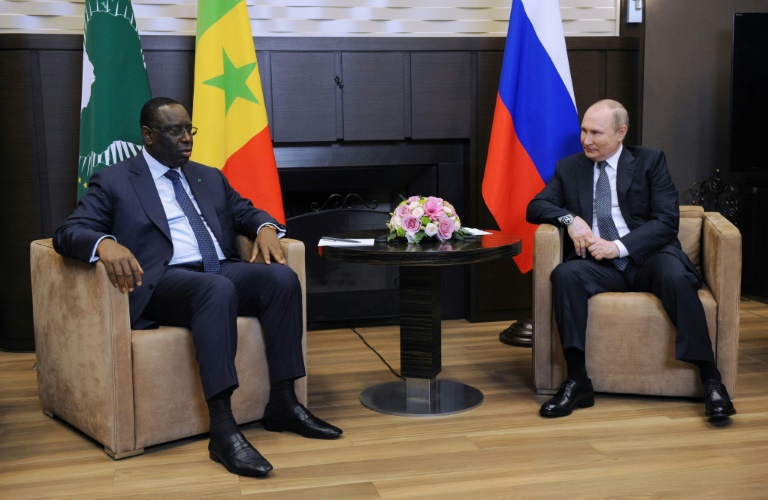 Putin hosted Senegalese President Macky Sall, who chairs the African Union, at his Black Sea residence in Sochi on the 100th day of Moscow’s offensive in Ukraine, with global food shortages and grain supplies stuck in Ukrainian ports high on the agenda.

Sall asked Putin to “become aware that our countries, even if they are far from the theatre (of action), are victims on an economic level” of the conflict.

He said it was important to work together so that “everything that concerns food, grain, fertiliser is actually outside” of Western sanctions imposed on Moscow after Putin sent troops to Ukraine on February 24.

Sall also said that due to Western sanctions “we no longer have access to grain from Russia and especially fertiliser” that is crucial for Africa’s “already deficient” agriculture.

“That really creates serious threats to the food security of the continent,” Sall added.

In his remarks in front of reporters, Putin did not mention grain supplies but said Russia was “always on Africa’s side” and was now keen to ramp up cooperation.

“At the new stage of development, we place great importance on our relations with African countries, and I must say this has had a certain positive result,” Putin added.

“Our turnover is growing,” he added. “This year, even in the first months of this year, it has grown by more than 34 percent.”

Washington and Brussels have imposed unprecedented sanctions against Moscow, pushing Putin to seek new markets and strengthen ties with countries in Africa and Asia.

The Kremlin said the two leaders discussed expanding “political dialogue” between Russia and the African Union as well as economic and humanitarian cooperation.

“With a high degree of probability and confidence, I can assume that the president will give exhaustive explanations of his vision of the situation with Ukrainian grain,” Kremlin spokesman Dmitry Peskov said.

He said Putin will explain “the real state of affairs.”

“No one is blocking these ports, at least not from the Russian side,” Peskov added.

Putin has said Moscow is ready to look for ways to ship grain blocked in Ukrainian ports but has demanded the West lift sanctions.

Moscow’s military campaign in Ukraine and a barrage of international sanctions on Russia have disrupted supplies of fertiliser, wheat and other commodities from both countries, pushing up prices for food and fuel, especially in developing nations.

Cereal prices in Africa, the world’s poorest continent, have surged because of the slump in exports from Ukraine, sharpening the impact of conflict and climate change and sparking fears of social unrest.

Ships loaded with grain remain blocked in Ukraine, which before February was a leading exporter of corn and wheat and alone accounted for 50 percent of world trade in sunflower seeds and oil.

The UN has said Africa faces an “unprecedented” crisis caused by the conflict.

In 2019, Putin hosted dozens of African leaders in Sochi in a bid to reassert Russia’s influence on the continent.

Though never a colonial power in Africa, Moscow was a crucial player on the continent in the Soviet era, backing independence movements and training a generation of African leaders.

Russia’s ties with Africa declined with the collapse of the Soviet Union in 1991 and, in recent years, China has emerged as a key foreign power on the continent.