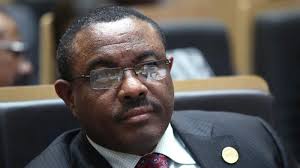 THE Head of the African Union Election Observation Mission (AUEOM) to Zimbabwe Hailemariam Desalegn who arrived in the country Tuesday said he was pleased with the country’s progress towards Monday’s general elections.

Speaking to journalists soon after touching down at the Robert Mugabe International Airport in Harare on Tuesday, the former Ethiopian Prime Minister said work done towards Zimbabwe’s 2018 elections so far was satisfactory adding that he hoped to see the peaceful environment continue up to the end of the elective process.

“I am glad to be in Zimbabwe which is in the course of changing to democracy.

“I have been following the electoral processes such as the administrative issues regarding the election and the campaigning process including civic education.

“So far, things are going in the right direction.”

The AU observer team leader said Zimbabwe’s elections shall be assessed based on the Charter for human rights and democratisation of African nations.

Boshe urged Zimbabweans to ensure the process was free and fair.

The country holds its first ever elections since the fall of long serving leader Robert Mugabe in November last year.

The period leading up to the plebiscite has been observed by many as the most peaceful since independence in 1980.