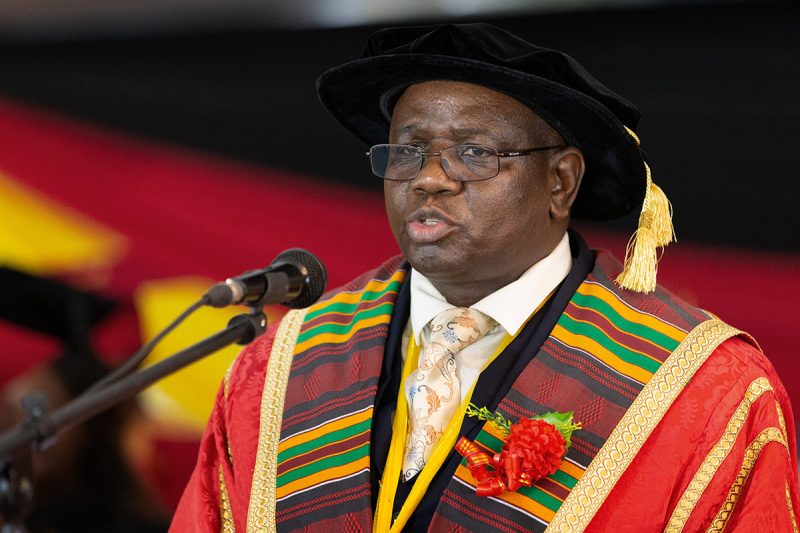 Stephene Chikozho, Africa University’s director of advancement and public affairs, said Furusa was taken to Victoria Chitepo Hospital in Mutare in the early hours of January 13 and died a few hours later.

Furusa, who became vice chancellor in 2015, was shaped by his experience as the first person in his family to obtain a higher education degree. He is being remembered as a champion for educational access for underprivileged students and an important voice for United Methodist-related higher education.

North Katanga Area Bishop Mande Muyombo, AU board chair, shared his sadness and said the best way to honor Furusa is to carry on his legacy.

“There are no words rich enough and no emotions deep enough to adequately put across the loss that we feel both individually and collectively,” he said.

Africa University is the first and only fully accredited institution of higher learning established on the African continent by action of the General Conference of The United Methodist Church.

Furusa served as dean of the College of Arts and Humanities at California State University, Dominquez Hills, before being named vice chancellor at Africa University.

He held a Doctor of Philosophy degree in African Literature and Critical Theory, a Master of Arts and a Bachelor of Arts Honors in English, all from the University of Zimbabwe, as well as a diploma in education from Bondolfi Teachers College in Masvingo, Zimbabwe.

“Furusa set up an innovation hub on the campus that allowed opportunities for students and faculty to bring new ideas to us and have the hub turn those innovations into realities,” he said.

Salley said Furusa had a vision to make Africa University a world-class university and he worked long hours on that goal.

“He was a person of great faith and made decisions after much prayer and supplication,” Salley said. “It is rare that I find persons who live their theology.”

The world has lost a great friend, said Lisa Tichenor, a member of the Africa University Board of Directors and Highland Park United Methodist Church in Dallas.

“Furusa cared greatly about advancing the university in its educational capabilities and developed the necessary leadership to achieve this. He attended to individual students and staff, creating an atmosphere of family among all of us whose lives he touched,” she said.

Professor Peter Mageto, who has been named the acting vice chancellor by the Africa University Board, said online learning was one of Furusa’s innovations.

“He introduced it in the country when many did not believe in it,” said Mageto, who had previously served as the university’s deputy vice chancellor.

Bishop Eben Nhiwatiwa of the Zimbabwe Episcopal Area, said the relationship between the episcopal area and university was harmonious.

“On (Furusa’s) suggestion, the episcopal area entered into a partnership with Africa University regarding the pastors’ school, enabling Zimbabwean pastors to hold the event at the institution,” said Nhiwatiwa.

Like what you’re reading and want to see more? Sign up for our free daily and weekly digests of important news and events in the life of The United Methodist Church.

The Rev. Greg Bergquist, top executive of the United Methodist Board of Higher Education and Ministry, said Furusa was instrumental in elevating the university by ensuring students’ long-term success.

“It is hard for me to imagine an Africa University without Professor Furusa’s leadership and compassionate presence,” he said.

Thomas Kemper, who recently retired as top executive of the United Methodist Board of Global Ministries, remembered first meeting Furusa in 2013.

“As a university board member, I was part of the search committee that later unanimously brought his name to the Africa University Board for election,” he said.

“We had some very qualified candidates, but he was the one who brought joy and excitement to the interview. He wasn’t looking for a job. He hadn’t come for an interview. He had come to share a vision and a calling — a calling to return to his homeland to give back; a calling to lead a Christian Pan-African university, and a calling to form leaders who contribute to the healing of the African nations,” Kemper said.

Danjuma Barde, vice president of the Students Representative Council, said the students have lost a mentor and “a true icon of generational leadership.”

Furusa was buried Friday in his home village of Nhema in Shurugwi in southern Zimbabwe. He is survived by his wife, Zanele, daughter Charlotte and sons Osborne, Tanaka and Munashe (Junior).