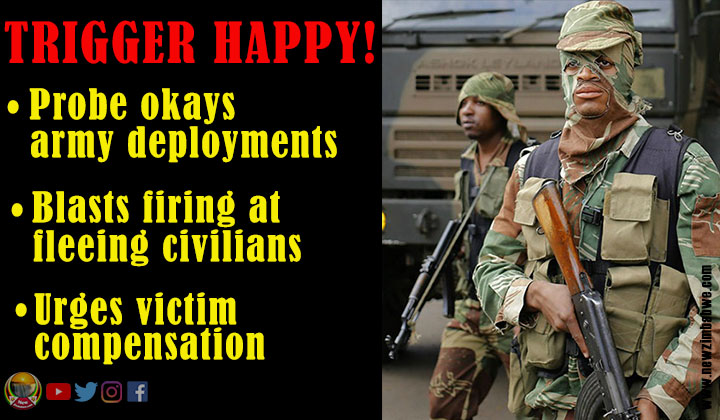 THE Commission of Inquiry into the August 1 post-election violence came close to blaming civilian killings on the army and the police, describing the firing of live ammunition at unarmed civilians as “unjustified”.

This was revealed by President Emmerson Mnangagwa Tuesday while going through parts of the Kgalema Motlanthe led probe team’s report which also blamed MDC Alliance leaders for inciting wild protests on the fateful day.

Six people were killed by what is still believed to be members of the army who were deployed into central Harare on the day to quell wild protests by suspected MDC supporters who were angered by the slow announcement of election results by the Zimbabwe Electoral Commission.

In its report, the seven member panel failed to draw conclusions on who fired the fatal bullets but gave strong hints the military had a hand in it.

At a press briefing at Munhumutapa Building Tuesday, President Emmerson Mnangagwa read parts of the report in which the probe team okays the deployment of the military to deal with civilian protests but seems to be blaming the same army for the resultant deaths.

The commission said that both property and lives were under threat at various parts of the city during the tense period when it had been apparent police were incapable of containing the skirmishes at the material time.

It also said the firing of warning shots by security forces in pursuit of their stated mission was proportionate.

The commission said “there was compliance with the relevant law as evidenced by the trail of communication between the relevant government authorities”.

“However, the use of live ammunition directed at people especially when they were fleeing was clearly unjustified and disproportionate,” said Mnangagwa while reading straight from the report.

“The use of sjamboks, baton sticks and rifle butts to assault members of the public indiscriminately was also disproportionate.

Soldiers beat a supporter of the opposition Movement for Democratic Change party of Nelson Chamisa outside the party’s headquarters during the ill-fated August 1 demonstrations.

The commission also found that it was undisputed that six people died and the 35 injured were as a result of gunshot wounds, based on the evidence from the city’s two major hospitals, Harare and Parirenyatwa.

The seven member panel also noted that there was an additional 11 gunshot victims who used other medical facilities which were different from the two government health institutions.

It also noted that there were at least six victims who sustained injuries as a result of the actions by protesters themselves.

Motlanthe and his team recommended that members of the military and the police found to have been in breach of their professional duties and discipline should be identified and appropriate action taken against them.

The commission’s appointment and subsequent hearings have been the subject of intense debate among locals with the opposition querying the involvement of Zanu PF activist and University of Zimbabwe professor Charity Manyeruke.

The opposition, which has been accused by the commission of inciting the violence that elicited the army reaction, has also questioned Mnangagwa’s role as principal of the probe team when all seemed he had a hand in the alleged army killings as Commander-in-Chief of the Zimbabwe Defence Forces.