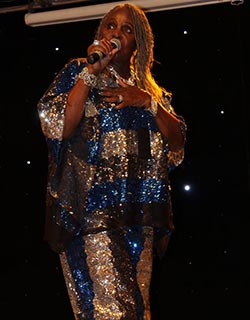 THE inimitable South African jazz legend, Dorothy Masuku, has implored the government to give a befitting honour to Zimbabwean artistes, both alive and dead.
Masuku was the guest of honour at the 13th edition of the National Arts Merit Awards (NAMA) which were held in Bulawayo, her city of birth, last Saturday.
Auntie Dot, as she is affectionately known, challenged government officials led by Minister of Sports, Arts and Culture, Andrew Langa and arts stakeholders who attended the event to preserve the legacy of artistes, especially those who have passed away.
“Minister (Andrew Langa) I have one request, please do me a favour. Please honour those artistes who have passed away and even those who are still alive,” said Masuku.
She gave a special mention to the late Mbira songstress Chiwoniso Maraire who passed away last year.
To the surprise of many, the National Arts Council of Zimbabwe (NACZ) this time around did not honour artistes who passed away last year as per tradition during the awards ceremony.
Auntie Dot also took time to offer advice to female musicians whom she said must desist from doing crazy things on stage.
“The other thing I am going to request from our young girls is that, to be a performer you do not need to do crazy things. Every time you wake up, look at the mirror, it will never lie to you.
“What you are doing is hard work, you have to take it seriously. I have been singing for the past 60 years. You have to respect music,” she said.
To prove that she still had the energy and stamina to perform, Masuku, belted one of her well known songs, Andizensisi, which saw Minister Langa, Bulawayo Minister of State for Provincial Affairs, Eunice Sandi Moyo and celebrated poet Albert Nyathi, take to their feet, with the rest of the guests cheering on.
The singer-songwriter was born in the then Rhodesia in 1935, in Bulawayo to a South African mother and Zambian father.
Her family moved to South Africa when she was twelve due to her health. By the time she was nineteen she was touring in South Africa with singers she had admired as a girl.
Masuka’s music was popular in South Africa throughout the 1950s, but when her songs became more serious, the government began questioning her. Advertisement

Her song Dr Malan, which listed some of SA’s oppressive laws, was banned. And in 1961 she sang a song for Patrice Lumumba which led to her being exiled for 31 years.
On the first instance of exile, Sis Dot, was in Bulawayo in 1961 when the Special Branch seized the master recording of one song and she was advised not to return until it was safer. Between that time and 1965, Dorothy was in exile, working in Malawi and Tanzania.
In 1965, she came back to Bulawayo but had to flee again and only returned after independence in 1980.