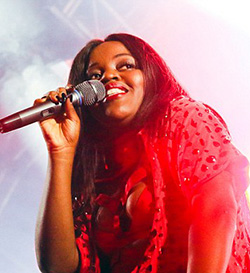 Aussie hip-hop star Tkay Maidza has caught the attention of the Run the Jewels rapper and many others with her quick-fire rhymes and determined approach
ON stage, Tkay Maidza means business. A tiny Zimbabwe-born, Australia-reared whirlwind of energy, Maidza stalks the stage kicking ass and taking names as she packs considerable oomph and wallop into her quick-fire rhymes.
On record and especially on her Tkay debut album, Maidza takes that live energy and turns it into a series of intense, infectious soundwaves. The tracks duck and weave with the power and compulsion of a boxing match.
On the phone, Maidza giggles a lot. She’s still getting used to the fact that people beyond her immediate “hood”, city and country want to talk to her. That wasn’t in the plan when she started rhyming. Actually, come to think of it, there was no plan.
“I was just writing for the sake of writing at the start,” she says. “I’d be really angry about school or people or I’d be writing about having a fun time with my friends. I remember once doing an exam and finishing early and spending the spare time writing a song about leaving the exam room. There was no real goal, it was just about getting some experience.”
What she was lis

tening to at the time informed her flow. She dug Kanye West (“I was really passionate about My Beautiful Dark Twisted Fantasy and that inspired me to write music”), Lauryn Hill and Missy Elliott, but she really dug Nicki Minaj.
The enthusiasm down the phone when ta
lk turns to the Young Money queen is palpable.
“She was huge for me. I was such a fan of hers back in her mixtape days, I loved Beam Me Up Scotty, so it was really inspiring when she crossed over. Here was someone I was really into and you saw her becoming big right in front of your eyes. It’s always supercool to see someone you got into early catch on with more people and become a legend basically,” Maidza says.Advertisement

“I remember I found a leak of Super Bass and I thought it was such a great radio song and a month later, it was everywhere. I was a crazy fan. That song was so unique but it had all the right elements to be fresh so you knew it was going to happen.”
Amazing website
In Maidza’s own case, it was Austr
alian national radio station Triple J which pushed her into the limelight by picking up and playing her first tracks such as Brontosaurus.
“What’s great about Triple J is that it has this really amazing website called Unearthed where anyone can upload songs,” she says. “The station has moderators who then listen to every song and if they like it, they’ll write about it and play it. For first steps to see if you’re doing the right thing, it’s so valuable for so many people. Flume star
ted out on Unearthed and so did so many Australian acts.
“As soon as it crosses over to radio, it literally gets you to a million listeners really quickly. They take pride in their discoveries and they’ll keep supporting you. They’re really honest, which I appreciate: if they don’t like a song, they’re not going to play it, but they’ll get behind the ones they like.”
When all that was kicking off, she was studying architecture in college. “It was either going to be architecture or pharmacy. I know a bit more now about describing things from buildings so if I want to be obscure in my lyrics, I know what to say,” Maidza says.
However, her stint as a would-be architect didn’t last long, much to the chagrin of her parents. “They didn’t think at first that it was a good idea for me to do music full-time and they said I should stay in school and wait until something big happened and I could do music then,” she says.
“But I had to keep cutting out of school to do shows and recording and they were paying for school so it was a case of, ‘Okay, we’re not going to pay for something if you’re not going to be there’, so that was the end of that.”
Guest star

Right now, the focus is on the album and checking the response it is getting worldwide. “I’m happy with it. I wanted to write about the experiences I was having, finding strength in isolation and what happens in those times when you’re really confused and don’t know where you’re going. A lot of the songs are about the experiences I had between finishing school and then starting all over again and travelling a lot.”
There’s only one guest star on the album, but it’s one who really catches the eye. Maidza is chuffed to bits that Killer Mike from Run the Jewels is there and not just because of his contribution to Carry On. No, this is about an endorsement for what she’s doing.
“You always wonder if what you do is good enough and how it rates so when someone like Killer Mike comes along, it’s so cool,” Maidza says. “He saw me play at a show and said something nice about me so that was the start.
“I really love Run the Jewels, so to have the opportunity to work with someone like him has been great. You’re also a little nervous because you know if it’s not good enough that they’ll say no so you really have to be on top form when the chance occurs.”
– Tkay is out now on Kitsune