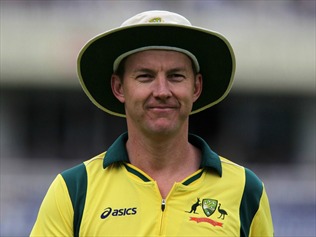 FORMER Australian cricketer Brett Lee has been dragged into a social media storm over hunting photos, after an image emerged of he and Glenn McGrath posing with two children next to a dead animal.
THE image surfaced a day after images emerged of McGrath on a 2008 safari in Zimbabwe where he posed, gun in hand, next to a dead elephant.
The new Daily Mail photo shows Lee, McGrath and two children posing next to what appears to be a dead deer.
The picture is understood to have been taken on a shooting farm in Africa and shows Lee resting his hand on the animal while a child holds its head.
The photo drew a fresh storm on social media on Sunday.
“Teaching the next generation to be heartless men,” wrote one Twitter user.
“Brett Lee and Glenn McGrath smiling assassins. Shame on you. Lowest of the low,” wrote another.
However NSW Christian Democrat Fred Nile backed the pair and dismissed the negative online comments.
“@glennmcgrath11 & @BrettLee_58 are absolute Aussie legends. Faux twitter rage cannot tarnish them or their legacy. Happy Hunting,” he wrote.
McGrath, who is president of the McGrath Foundation breast cancer charity he founded with his first wife Jane, said after images emerged on Saturday that he regretted taking part in the 2008 hunt. In the same year, he lost Jane to breast cancer.
“I participated in a hunting safari in Zimbabwe that was licenced and legal but in hindsight highly inappropriate,” he said on Twitter.
“It was an extremely difficult time in my life and looking back I deeply regret being involved.”
On February 19 the McGrath Foundation announced it was suspending its relationship with Greyhound Racing Victoria amid the fallout from the live baiting scandal.Advertisement