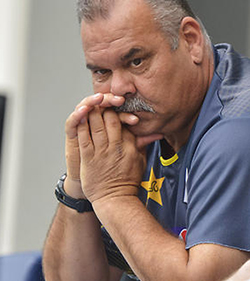 AUSTRALAIN Dav Whatmore has been appointed as the new Zimbabwe cricket coach ahead of the 2015 World Cup.
Whatmore, who previously coached Sri Lanka and Bangladesh, will assume coaching responsibility after Stephen Mangongo was fired on December 18.
The new coach and Zimbabwe Cricket (ZC) are hoping to sign a longer-term deal after the World Cup, which kick starts from 14 February.
Under the deal, Zimbabwe players will also receive coaching from Whatmore’s Dubai-based cricket academy.
Meanwhile, ZC failed to clinch a deal with former captain and coach Dave Houghton as Whatmore’s assistant and team batting coach due to his commitments with English county side Middlesex.Advertisement