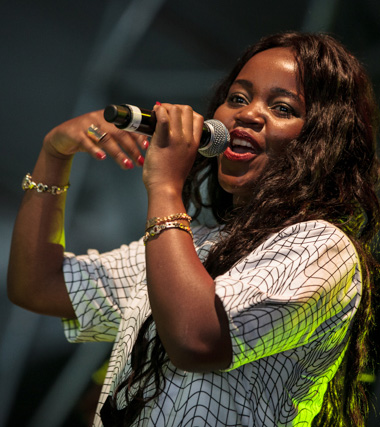 ZIMBABWE born Adelaide rapper Tkay Maidza continues to make her mark on the Australian scene.
With her new single M.O.B., which will appear on her debut album later this year, Tkay is reminding peeps to not let the little things get them down.
19-year-old Tkay penned M.O.B.— aka “Money Over Bitches” — as a letter to her future self, declaring the importance of hard work and staying focused.
An extended cut of a track from her 2014 Switch Tape mixtape, M.O.B. is sure to have crowds chanting “money over bitches” in no time.
Produced by longtime collaborator and tour DJ Elk, and mixed by Andrew Dawson (Kanye West, Jay-Z, Childish Gambino), the track sees Tkay blend pop hooks and gritty rave tones with her bratty rapping style.
She says she was inspired by rappers Danny Brown and Kendrick Lamar during the song’s creation.
Tkay is currently prepping for sets at Mountain Sounds and Groovin The Moo, as well as dates in support of Charli XCX and a stopover at South By Southwest.
M.O.B. is available now via iTunes.
Advertisement