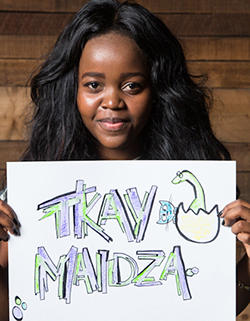 ADELAIDE’S hip-hop darling Tkay Maidza has already begun to make waves overseas, catching the attention of US electronic producer Must Die!
The house hero, signed to Skrillex’s OWSLA label, has enlisted Maidza’s talents for the freshest cut from his latest disc Death & Magic.
Entitled Imprint, it sees the Zimbabwe-born pocket rocket in full flight, spitting sassy bars of danceable rap goodness.
Though the track was released last year, Maidza now also appears in the freshly posted video for the heavy house cut, busting rhymes from behind a chain link fence while intense scenes of gang violence erupt on the other side.
“After much blood, sweat, and tears… I present the video for Imprint ft. my bud Tkay Maidza,” MUST DIE! posted on his official Facebook page today.
He further explained to that the clip packs a weighty message. “I think the video really captures the thought of making an impression, or an imprint, socially,” he said.
“A lot of people focus on popularity or impact and I think it’s interesting to see a video where it isn’t glorified. If everyone only cared about being the most popular musician, who would make the good music?”
Neither popularity nor good music seem to be in short supply for Tkay Maidza, though. As well as lapping up some of that juicy international exposure, the pint-sized rapper isn’t faring too poorly on home turf either.
Gearing up to embark on a completely sold-out national tour this week, she’s also prepping for her upcoming Groovin The Moo sets and support dates for Charli XCX.
As if that wasn’t enough, Tkay’s also getting some payback to those who doubted her breakthrough hit.
“Hey guess what scientists have recently proved that a brontosaurus is actually real,” she posted to Facebook. “s/o to lol trolls who were like “they aren’t even real so your song is fake” lol bye… THE BRONTOSAURUS LIVES!”
This article as originally published by MusicFeeds.
MUST DIE! – Imprint (ft. Tkay Maidza)