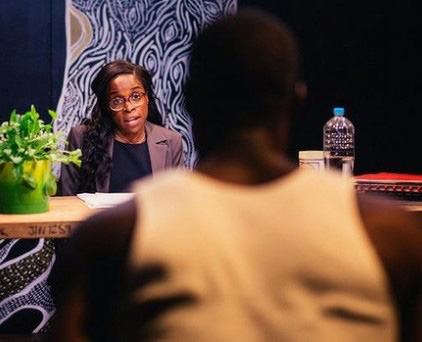 I’VE been racking my brain trying to think of a play produced in Sydney over the past decade set in modern day Africa. Athol Fugard’s​ Valley Song, staged at the Seymour Centre in 2008, is about all I can come up with.
Playwright Anders Lustgarten’s​ Black Jesus, which, like Valley Song, is set in a time of transition, is a rare beast then. Credit to bAKEHOUSE Theatre Company for staging it – this is the Australian premiere – and believing it can find an audience. It should.
Lustgarten sets his play in a post-Robert Mugabe Zimbabwe in which a truth and justice commission has been established to examine crimes and atrocities perpetrated under the old regime.
It falls to investigator Eunice Ncube (Belinda Jombwe-Cotterill) to question one of the most notorious of the abusers, Gabriel Chibamu (Elijah Williams), a hard man of the Mugabe-sponsored youth militia known as the Green Bombers.
Gabriel’s nom de guerre was “Black Jesus”, though the quality of his mercy left something to be desired.
Now Gabriel is one of hundreds rotting in Zimbabwe’s jails. But if he helps Eunice with the building of a case against his superiors, and can demonstrate remorse, there is hope for leniency, even release.
But there are other forces in play, embodied in the avuncular figure of political operator Endurance Moyo (Dorian Nkono​), who has known Eunice since she was a child. He will pull any number of personal strings to ensure her investigation into the chain of command only goes so far.
Eunice’s predicament isn’t an entirely novel one, but Lustgarten’s setting confers freshness and urgency to this modest, tightly-made production directed by Suzanne Millar.
The performances are very sharp. Williams, in what amounts to his Sydney stage debut, plays the charismatic Gabriel with appropriate and sometimes unnerving ferocity.
Jombwe-Cotterill proves an excellent cat-and-mouse player as the nervous seeming yet ultimately steely Eunice.
Nkono finds the necessary menace in Moyo’s chuckling bonhomie. Jarrod Crellin​ performs well in the role of Eunice’s sometime boyfriend Rob, a married white lawyer who proves easily intimidated by those with skeletons in the cupboard.
Aspects of Lustgarten’s premise and plotting don’t entirely satisfy. Eunice’s relationship with Rob is sketchy.Advertisement

Gabriel’s conversion to the idea that he, too, is a victim of abuse seems rushed.
But the play’s willingness to pose questions about the nature of justice in post-colonial societies, and consider the pitfalls facing state-sponsored reconciliation processes, makes for absorbing viewing.