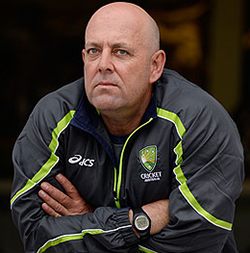 AUSTRALIA will be looking to shake off the rust quickly after a long break when their triangular one-day series begins in Zimbabwe next week, coach Darren Lehmann said on Monday.
Michael Clarke will lead a 14-man squad to Harare for a two-week series that also involves South Africa in Australia’s first international commitment since the ICC World T20 in Bangladesh more than four months ago.
The Australians have regrouped after beating South Africa in a three-Test series in March.
That rounded off a gruelling schedule of 17 Tests in 12 months in India, England, Australia and South Africa, including back-to-back five-Test Ashes series.
“Professionally, everyone was tired – coaches were tired, players were very tired, and they did an amazing amount of work in 12 months,” Lehmann told reporters in Brisbane.
“So to get a break before we go on the road for two years was pretty important.
“Now the (challenge) is getting us back up to the skill level that we need to compete at international cricket.
“We’ve got Zimbabwe and South Africa and then we’ve obviously got a big Test in the UAE (against Pakistan).
“I think everyone is jumping out, they just want to play,” Lehmann added.
Now the (challenge) is getting us back up to the skill level that we need to compete at international cricket.
“We’re going to be a bit rusty with the skills, but that’s okay. We’re gonna make mistakes, but that’s okay. What we need to do is build and build and build to become a better Test side, a better one-day side, a better Twenty20 side.”
Clarke, who finished the South Africa series with a fractured shoulder sustained while batting in the final Test, said players had been close to exhaustion.
“A lot of individuals would have needed that break anyway, so if there wasn’t a break in the schedule I think guys would have got injured because we were on the brink of breaking in that last series in South Africa,” he said.
“We were all pretty fatigued, mentally as well as physically. So the squad certainly needed this break, and it’s given us the chance to freshen up, get our fitness back together and make sure we’re ready for a big two years ahead.”
Following the Zimbabwe series, Australia plays Pakistan and then hosts South Africa, England and India in limited-overs fixtures plus Tests before the 2015 World Cup in Australia and New Zealand.Advertisement

After that, it heads to the West Indies before the 2015 Ashes series and then a series in Bangladesh.
New Zealand, the West Indies and India are scheduled to tour Australia during the summer of 2015-16 after which the Australians travel to New Zealand, South Africa and Sri Lanka ahead of another hectic 2016-17 home summer.
Australia plays its first match of the six-game round-robin series against Zimbabwe in Harare on August 25.
Shane Watson’s ankle injury and David Warner’s paternity leave have given Phil Hughes, with two recent double-centuries for Australia A, a late recall to the 14-man ODI squad which flies out on Wednesday.