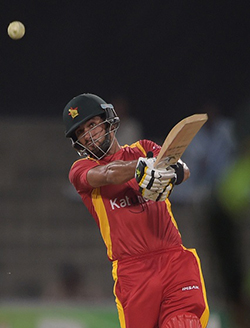 A BRUTAL onslaught by Mitchell Marsh and George Maxwell carried Australia to a crushing 198-run victory over Zimbabwe in the first game of a one-day triangular series on Monday.
Marsh stroked 89 from 83 deliveries after coming in at No. 3, while Maxwell hammered a 46-ball 93 as the pair added 109 runs for the fourth wicket in just nine overs to help Australia post 350 for six in their 50 overs.
In reply, Zimbabwe were bowled out for 152 in 39.3 overs, with Hamilton Masakadza’s 70 the only score of note as the hosts crashed to their biggest ever defeat against Australia.
The Australians picked up a bonus point for their efforts, and will be pleased to see their batsmen take some form into Wednesday’s clash with South Africa.
Australia hit a record 15 sixes in their innings, with Marsh and Maxwell accounting for nine of them, as the tourists easily beat their previous best of five in an innings against Zimbabwe.
It was also Australia’s highest score in an ODI against Zimbabwe, eclipsing the 344 for seven made in Hobart during a triangular series in January 2004.
Although Australia started slowly after they were asked to bat first on a sluggish pitch, Aaron Finch and Brad Haddin laid a solid platform with an opening stand of 98.
Haddin was bowled by Zimbabwe captain Elton Chigumbura for 46, while Finch went for 67 when he steered a delivery from off spinner John Nyumbu to backward square leg.

George Bailey, who was leading Australia in the absence of the injured Michael Clarke, failed to get going, but his dismissal brought Marsh and Maxwell together and the results were spectacular.
“I just had the role to get us as deep as I could, and obviously if we had wickets in hand at the end, with the batting we have we could apply some pressure to their bowlers,” Marsh said.
“I thought Maxi and the others guys at the end batted really well to get us to a great total.”
The pair at one point added 63 in four overs, with Maxwell producing the shot of the day when he reverse-swept Sean Williams for six over the longest boundary, and Australia added 147 in the final 10 overs despite both men getting out for career-best scores.Advertisement

Mitchell Johnson’s unbeaten 20 came from just 10 deliveries, and included a monstrous six that smashed the window in the commentary box, spraying broken glass over former Zimbabwe seamer Mpumelelo Mbangwa in the commentary chair.
Zimbabwe’s only meaningful partnership was the 63 put on by Sikandar Raza Butt and Masakadza for the second wicket, as the pair attempted to provide some sort of foundation.
However when Raza swept a Nathan Lyon delivery straight to backward square leg to depart for 33, the procession began.
Brendan Taylor guided a Mitchell Johnson lifter to slip, while Elton Chigumbura’s top edge was taken by wicketkeeper Brad Haddin and Sean Williams hit man of the match Marsh to extra cover.
Part-time spinner Steven Smith ran through the tail to record figures of 3 for 16, while Mitchell Starc took 2 for 23.