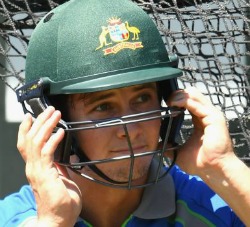 RAYMOND Cartwright likens his family’s old life in Zimbabwe to cricket’s most frantic, unpredictable format.
“In Africa everything is run at T20 pace,” he says. “Whereas in Australia it’s like a Test match. That’s the way I could probably describe the lifestyle we left there. It was T20 every day. ‘What’s going to happen next’?”
The father of Australia’s newest Test squad member, Hilton Cartwright, plans to be at the MCG on Monday, and is hoping what is around the corner right now is a Test debut for the 24-year-old all-rounder in the second Test against Pakistan.
During a difficult three years amid Robert Mugabe’s land reforms that led to the family’s departure permanently to Australia in 2002, they genuinely didn’t know what was coming next at their tobacco farm at Marondera, about 70km from Harare.
Hassled routinely by Mugabe’s henchmen, Raymond tried to keep a young Hilton and his sister Camilla away from the trouble as best he could, sending them off to stay with their grandmother in the capital on weekends when they weren’t at boarding school. The tipping point, though, was the invasion of his own father’s farm nearby, which the family had owned since 1933. It was then he knew they had to go.
“They always arrived after lunch on a Saturday and wanted to discuss the sharing of the farm and my heritage – in their eyes I was British, and that I should wander back to Britain and enjoy my life there,” says Raymond, who had bought his farm after the country’s independence in 1980.
“It was a controlled mental disintegration attempted on us to try and make us go. It was three years of that and it culminated in 2002 when they invaded my father’s farm – luckily my dad wasn’t there – and climbed into his house, took it over, took over the farm, the tractors, the trailers.
“And after about four days they then deposited my father’s furniture on my lawn. That was when it got quite scary. The moment it happened we made up our mind that we were going to leave the country and the first port of call if we could get in was Australia.”
Cartwright was 11 at the time and a junior swimming champion – the Zimbabwe under-9 champion in three of the four strokes – and he would soon begin a new life with his family in Perth.
Raymond first spent a “soul destroying” five months getting their crops off the thriving farm and “selling everything at 10 cents on the dollar”, with other members of the family moving to South Africa. Advertisement

The farm had been where Hilton first played cricket. “His memories of the farm are happy memories … seeing his granny, swimming and cycling, the freedom of large acreage farming which is what is was,” Raymond says.
“We had a lot of fun on the front lawn, he had his little cricket field and our two maids had young little children, boys and girls, and they’d have games. So he had someone to throw the ball at him from the age of about two.”
Those who have followed closely Cartwright’s rise in recent years speak of his great temperament. In a cricket sense he was also raised tough.
“He’s such a calm creature. Nothing really gets him worked up,” his father says. “He played hard-ball cricket from about the age of seven. We didn’t have the proper ball which you guys use here for juniors. And there were no helmets which was even more terrifying.”
Cartwright’s game was later honed at Wesley College in Perth and then under Justin Langer at Western Australia before his breakout season in 2015-16 with the Warriors.
And despite deep African roots – his father can trace his family history back to the 1820 British settlers to what is now South Africa, while his mother Lucinda’s forebears were pioneering settlers in modern-day Zimbabwe – there is no question whatsoever about Cartwright’s allegiance.
“He is utterly and completely Australian in every sense of the word,” his father says. “He’s lived most of his life here.”
Many years on, the Cartwrights look back fondly on their past in Africa, not allowing the tumultuous final months to cloud their perspective. With the tobacco farmer’s son on the brink of a Boxing Day debut, life is good.
“The whole thing with Africa and the violent removal of my father … you all get over these things. You don’t try to talk about them too often,” Cartwright snr says.
“I was never scared … I’m more scared of watching Hilton play cricket than I was of the people trying to shoot me and give me a hard time on a Saturday afternoon.”