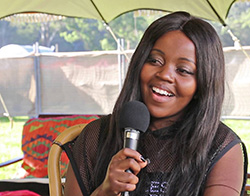 Australia-via-Zimbabwe rapper Tkay Maidza has been on the radar since 2014 when she dropped her Switch Tape mixtape.
She’s collaborated with Bok Bok and Baauer in the past few years and now she is coming through with a debut album, Tkay, this October.
“Carry On” is the lead single from the record and features a guest verse from Killer Mike.
“The song is about people trying to stop my stride, but I guess what I’m trying to say is I have bigger issues that only matter to me as a youngin’ at this point in my career and Killer Mike is reinforcing that,” Maidza told Pigeons & Planes.
Advertisement