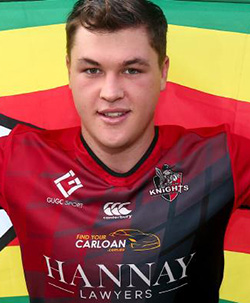 AUSTRALIA: THE Gold Coast is a world away from the remote African town in which talented rugby forward Connor Pritchard grew up.
The Colleges Knights flanker was born in Brisbane but moved with his parents to Zimbabwe at the age of two.
There they lived in Victoria Falls, a location in the far northwest of the country bordering Zambia and famous for its stunning waterfall regarded as one of the seven natural wonders of the world.
“My mum is Zimbabwean … we moved back to Zimbabwe because my parents just love the bush,” Pritchard said. “My mum is a biologist and my dad works in the tourism industry.”
While his parents still live in the southern African nation, Pritchard, 20, moved to Australia about six weeks ago to study a Bachelor of Science at Griffith University on the Gold Coast.
“(Zimbabwe) is so different to Australia. I mean there is literally no opportunities for work, for sport, for anything,” he explained.
“That’s why I decided to move back here to pursue my dream to become a professional rugby player as well as get a degree, get a good job.”
Along with his marine science aspirations, Pritchard has quite the rugby background: He came through South African Super Rugby club the Sharks’ under-20s system and captained Zimbabwe at under-19s and under-20s levels.
He already has five national senior caps to his name and will add to that next month when he flies back to represent Zimbabwe in the Rugby Africa Gold Cup.
Pritchard’s five-week stint abroad will allow him to play four matches in a tournament that holds major significance, doubling as part of the 2019 Rugby World Cup qualification process.
Pritchard admits issues such as a lack of funding could mean it is sometime before Zimbabwe – ranked 36th in the world – can properly challenge on the global rugby stage.
In between his national duties, he hopes to help Colleges to Gold Coast District Rugby Union premiership glory before stepping up his bid for a dream Super Rugby gig.
Next in that pursuit, he says, is a 2018 move to Queensland Premier Rugby likely with either Bond University or Sunnybank.
He’s been quick to impress in his time at the Knights.