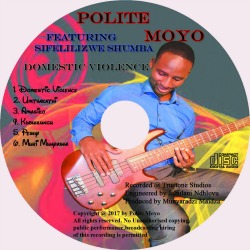 AUSTRALIAN-BASED musician, Polite Moyo, aka DJ Spox, is set to release a six-track Sungura album titled Domestic Violence, which features songs in Shona, Ndebele, Sotho and English.
In the new promising album, DJ Spox ropes in forgotten “Vachibhanzi Vauya”, hit maker Sifelilizwe “Fair” Shumba.
The songs bring awareness to the issue of migration, societal issues such as domestic abuse. They provide a combination of his exciting guitar and mellow vocals, with a rhythmic undercurrent that bears testimony to his playing style, and punctuated, throughout, with different languages.
Born in the Zelezele area of Gwanda where he began his music career, DJ Spox joined the group Afro Oz Musica as a bassist after he moved to Australia a few years ago for studies.
DJ Spox was mentored by his cousins with whom he grew up and have had a deep influence on his career.
“It was here that he developed his musical tastes and interests, and it wasn’t long after picking up a guitar that he never looked back. His first foray into learning an instrument himself came when he started to play his homemade guitar aged just 5 years old.
Later he began to play from a 1 string guitar, which he continued to add more strings as he mastered the playing technique,” his publicist said in a statement to New Zimbabwe.
The then young Polite, on realising that music was his passion, would showcase his talents when herding cattle with his peers and it did not take long for the community to notice the gift he had.
He was to join a local outfit, Kafusi Super Sounds, with who they performed at various gigs at and around Kafusi Growth Point.
“With Afro Oz Musica, he continued his music developed and was mentored by the renowned producer Munya Maidza, who continues to be his mentor. Here his musical ambitions continued to grow, aided by the sounds from all over Africa that he found all around him,” the publicist noted.
While DJ Spox’s roots lie in  traditional Zimbabwe music, he has found plenty of influence around the world as demonstrated by his debut album done in different languages which help” literally a room full of music from every corner of the globe,”.
Spox believes his musical development is in a way directed by everything that he listens to although he would single out Ndolwane Super Sounds, Ndux Malax and Alick Macheso as amongst his biggest influences.Advertisement