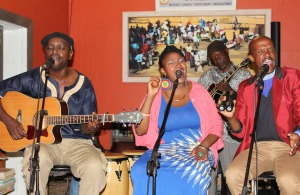 AUSTRIAN based Zimbabwean musician Dumisani ‘Ramadu’ Moyo last week held his first ever solo show in the country.
Moyo, who is known in music circles world over as Ramadu, is a vocalist, songwriter and producer for the much travelled Imbube group Insingizi.
The show, played out to a packed venue at Indaba Book Cafe in Bulawayo, featured Afro Jazz musician Jeys Marabini, guitarist Hudson Simbarashe, percussionist Bruno Ashley, with Nobuntu’s Duduzile Sibanda and Dumi Nyongola on vocals.
Performing in front of people who have only heard about him and may not have seen him perform before he relocated to Austria, Ramadu surely won them over with a neat and polished performance.
He mostly performed his own compositions contained in his solo album, Izambulelo, a 2001 release.
Some of the songs he performed include Amalobolo, Impi Yamabutho and MaGumede which was the by far the crowd’s favourite.
For a seasoned musician of his stature, Ramadu showed exactly what has made him a household name in most European cities.
His vocal prowess and guitar skills were evident on the night as he serenaded the crowd, backed by the powerful vocals of Dudu and Dumi.
Later in his one hour set, he was joined on stage by Marabini who also displayed his guitar skills when they performed the traditional song, Impi Yamabutho.
Besides his flourishing music career, the multi-talented Ramadu runs a recording label, 10th District Music, and has recorded and produced artists such as Marabini, the all-female Acapella group Nobuntu, Tshwalabenyoni, Vusa Mkhaya and IYASA.
He also co-founded a successful music project called MoZuluArt, a music group that mixes European classic music and Imbube vocal harmonies.
This project has been to many places including Beirut in Lebanon, Moscow, New York, Moldavia, South Africa and Senegal.
Advertisement