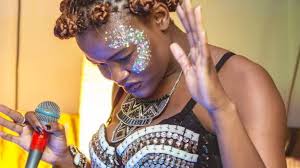 The international music festival organised by Reeperbahn Festival International and Music in Africa Foundation will run from this Monday to Friday 4 June.

The performances will be broadcast on the Music in Africa Facebook page on 31 May from 20:00hours CAT.

In an interview with NewZimbabwe.com, Awa Khiwe who is currently signed by Germany’s Outhere Records said the festival was a chance to market her art on a global scale.

Born Awakhiwe Sibanda, and known as Awa Khiwe in the music orbits, the fast rapper is originally from Nkayi, Matabeleland North province. Her music career spans for almost a decade and her lyrics confront societal ills like child marriages and gender based violence.

“I’m excited because it’s a great opportunity to spread my wings and market my music,” she told NewZimbabwe.com.

“I will network and meet people from different parts of the world and spread the word about my debut album which will be released soon.

“I think it’s a great opportunity for fellow Zimbabwean artistes to discover such platforms so that we can participate and cross over to other markets and export our music. The lockdown has introduced many digital networking opportunities and we should network as much as we can.”

“Promoting international cultural exchange and enabling small and medium-sized music industry participants to enter new and relevant cultural markets is the goal we have been pursuing with our spin-off Reeperbahn Festival as a central European music platform since 2016,” he said.

“With the support of the German Federal Foreign Office, we are taking this strategy into the world – even under the conditions of these challenging times.

“In cooperation with our partner the Music in Africa Foundation and their fantastic network, our participants are guaranteed the greatest possible amount of attention along with a high level of efficiency in establishing new contacts. With our Pan-African edition, I wish all delegates, artists and partners a successful four-day programme.”