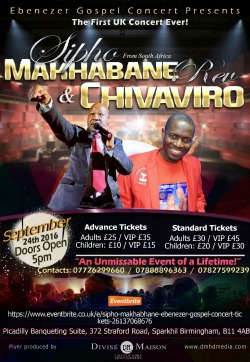 TRUMPET Africa Gospel Music Awards (Tagma) winner Rev Togarepi Chivario is set to perform in United Kingdom as part of celebrating his achievements with his fans in Diaspora.
He will share the stage with renowned South African gospel singer Sipho Makhabane. This will be Rev. Chivariro and his team’s third visit to UK in less than 12 months.The trip will also give his fans a chance to hear Makhabane’s own version of his gospel track Ebenezer.
In an interview with this publication, Rev Chivario said the show with Makhabane will be a blessed atmosphere for their fans who continue to grow in numbers.
“We will use the Ebenezer Celebrations set for the Harare Gardens on the 17th of September, to celebrate our African Award as well as a farewell to our home fans who have been supporting us amazingly.”
“We are most likely to be touring Australia soon after the UK concert as it is now Ebenezer everywhere.”
Rev Chivaviro also said gifts continue to pour in as they were recently blessed with a Toyota Mark 11 vehicle by Crossover Ministries.
Artisan Records manager, Allan Dzobo, said as a stable they have combined with some gospel artists to put together a celebration show for the Best Collaboration in Africa Award won by Rev Chivariro and his team.
‘We also thank Crossover Ministries for the gift to our artist and we have organised a show to honour Rev Chivaviro and the artists who collaborated with him in the song.
“We are also inviting other people who have been blessed by this song to come forward on the day, and I must admit millions of people have been blessed by this hit and unfortunately due to piracy the artists have nothing much to show for it, let’s use the celebrations to at least thank them.”
Prophet Rony of Crossover Ministries said this is the 9th car they have given out in recent years as they appreciate the “gifts that God has bestowed upon us in Zimbabwe”.
“Ebenezer is a huge blessing to our country,” he said.