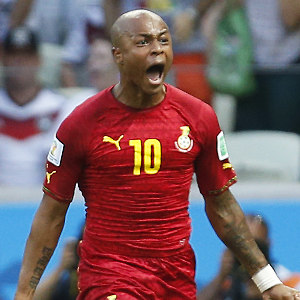 The friction between Ghana’s sports ministry and Football Association has hit new heights with senior players now having to pay for their own air fares.
Ahead of Ghana’s last AFCON qualifier on Saturday, Sports Minister Nii Lante Vanderpuye has told the FA that there will be no money for the team should foreign-based players be invited.
He argues that because the team has already booked a place at Gabon 2017, spending so much on flying players from Europe and elsewhere will simply be a huge waste of tax dollars.
It is in this light that the team’s deputy skipper, Andre “Dede” Ayew, has offered to purchase flight tickets for some of the 21 foreign-based members of Avram Grant’s 23-man squad for the home game against Rwanda on September 3.
Sources tell supersport.com that skipper Asamoah Gyan will also cater for some of the players.
According to the FA’s Deputy General Secretary, Ibrahim Saanie Daara, most of the players are ready to purchase their own tickets but the injured West Ham star has decided to fund the cost for players who are unable to do so.
“The truth is that the players themselves in a massive show of patriotism have decided that they want to pay for their own tickets to come for the match,” Daara said on Monday.
“However, there are some players in the squad who are unable to afford the tickets and for that Andre Ayew has decided that he will pay for them to turn up for the game.
“In this very last minute, it is impossible and if we don’t honour the match CAF will ban us from the African Cup of Nations and we will be banned from the subsequent Cup of Nations in 2019”.
On the minister’s part, his stance is clear.
“We have not officially communicated anything of the sort to the Ghana Football Association. By telephone communication I have told the Management Committee Chairman who is the vice president of the FA,” Vanderpuye told Happy FM in Accra.
“Yes, we don’t have the money to finance this particular match but we will use the money to cater for the [national female Under 17 team] Black Maidens and the national Paralympic team in Brazil.”
Ghana’s maidens, who are usually under-resourced, are getting ready for the Under 17 Women’s World Cup in Jordan. The minister has argued that Avram Grant should field a locally-based team against Rwanda for the chance to give the other national teams the best preparation as well.Advertisement

Vanderpuije also urged the GFA to pay for the tickets of the foreign-based players, although an official of the football governing body told Joy FM that this would not be possible.
“The same ministry has borrowed so much money from us to pre-finance previous games and qualifiers,” said Winfred Osei Kwaku, Vice Chairman of the Black Stars Management Committee.
“And because of that we have not been paid, so at the moment we are not in a financial position to do as the minister suggests.”
The ongoing friction between the two powerful bodies continues to bring tension into football administration at all levels in Ghana, and influential figures have been calling for a truce.