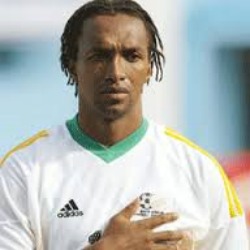 BAFANA BAFANA legend and midfielder John ‘Shoes’ Moshoeu has died at the age of 49 after a long battle with cancer.
His agent, Glyn Binkin confirmed the former Kaizer Chiefs star passed away Tuesday afternoon.
Moshoeu has been in and out of hospital and was admitted twice this year.
Binkin said, “It’s a sad day for South African and African football. He has been sick and in a way he is no longer suffering.”
In May 2014, Moshoeu hung up his boots after spending several seasons with third-tier side Alexandra United.
He was capped 73 times for South Africa and scored eight times.
Shoes, 49, was one of the stars of Bafana Bafana’s victorious 1996 Africa Cup of Nations team and held a special place in the hearts of South African football fans.
SA papers said they mourn the passing of a legend, whose greatness was amplified by his modesty and kindness.
Moshoeu began his career in Diepkloof with local amateur side Blue Whales before joining Kaizer Chiefs’ reserve side. After failing to break in to the first team, he joined Giant Blackpool where he teamed up with the likes of Fani Madida and Jury Bantwana.
In 1991 he helped Blackpool reach the infamous JPS Cup Final, where he ended up on the losing side against Dynamos.
Moshoeu returned to Amakhosi for his second spell in 1993 before leaving for Turkey, where he had stints with Genclerbirligi and Fenerbahce.
His return to South Africa saw him re-uniting with Amakhosi for his third and final spell and he helped the team win back-to-back League titles under Ted Dumitru.
Moshoeu’s form also saw him selected for the 2004 African Nations Cup at the age of 38.
Advertisement