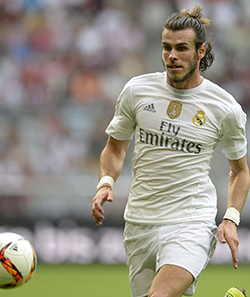 REAL Madrid boss Zinedine Zidane has resisted the temptation to rush back a fit-again Gareth Bale for their Champions League clash on Wednesday against an on-form Napoli backed by Diego Maradona.
Bale returned to training for the first time since suffering ankle ligament damage in November on Sunday and has been left out of Zidane’s 19-man squad.
Cristiano Ronaldo has been passed fit, though, as the Portuguese has shrugged off a knock picked up in Saturday’s 3-1 win at Osasuna to keep Los Blancos top of La Liga.
“He has had nearly three months out and we have to go slowly with Gareth,” said Zidane on Tuesday.
“Everyone wants to win the Champions League, but it is a hard and long road and we are on that path.
“The good thing is that we are in good shape. We have everyone fit, that means it will be harder to pick the squad, but I’m happy to see everyone ready and committed for the return of the Champions League.”
Napoli’s sensational free-scoring form that has seen them reel off an 18-game unbeaten run has seen the Italians’ hopes of shocking the holders soar.
Among the expected 10 000 strong travelling support will be Napoli’s greatest ever player as Maradona arrived in Madrid on Monday.
“Thankfully he is not playing! We are happy about that,” said Madrid midfielder Luka Modric on the presence of Maradona.
“He is one of the most important players in the history of football. It is nice he is here to see the game live.”
Zidane, though, insisted he is more concerned by the likes of the on-fire Dries Mertens, who has scored 14 goals in his last 11 outings, including three hat-tricks.
“He (Maradona) was one of the best players in the history of football, but I am more worried about those that are on the field.”
NO FEAR
No side has managed to retain the competition in the Champions League era with AC Milan 27 years ago the last team to win back-to-back European Cups.
However, Modric believes the 11-time winners are better placed than anyone else to bring that streak to an end in June’s final in Bale’s home city of Cardiff.
“We are Real Madrid and it has never happened, but we think we can be the first team to defend the title,” added the Croatian.
“Tomorrow is the first step against Napoli, that is the most important thing not looking further ahead. We want to be in Cardiff but we need to go game-by-game.”Advertisement

Napoli boss Maurizio Sarri promised not to curb his attacking philosophy despite being handed the daunting task of stopping the European champions on home soil.
“There are a lot of risks, that is evident, but playing with fear wouldn’t work,” said Sarri.
“We are facing Ballon d’Or winners, European and world champions that have won everything, but tomorrow it is important to see to what point we can compete with the best in the world.”
And Sarri is hoping a pre-match team talk from Maradona can inspire Napoli towards a first ever Champions League quarterfinal.
“I hope he has the chance to speak to the players.
“Having a legend there, speaking to the players and telling them they can play well can be used as fuel.”
Napoli will be forced to abandon one lucky charm, though, as Madrid will be the ones in their famous white jerseys on Wednesday.
The turnaround in Napoli’s fortunes in recent months coincided with superstitious president Aurelio De Laurentis’s decision to replace the club’s traditional sky blue colours for white back in November.