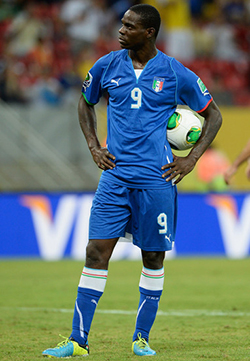 ITALY striker Mario Balotelli believes the presence of overt racism in his homeland means he is the target for more criticism and abuse because of his skin colour.
The 23-year-old former Manchester City forward said if he was white he would be treated more sympathetically by his compatriots.
Last year he was targeted by Roma fans while playing for AC Milan and said afterwards he would walk off the pitch if he encountered it again.
“They aren’t used to seeing people who are different, not white, who act not as rebels but normally,” he told the July edition of GQ magazine.
“I think what the ignorant people don’t like is that people who are different are allowed to act that way.
“These stupid people, they get angry with me, they say horrible things, but I haven’t done anything different from other people.
“I have made mistakes, like everyone does, and I have always paid for my mistakes.
“I think that if I was white maybe some people would still find me irritating or annoying but it wouldn’t be the same. Absolutely not.
“Jealousy is a horrible thing, but when this jealousy is towards people who are different from the majority, and who maybe also have more than you, then it becomes anger, it becomes rage, and that’s the overt racism.”

Balotelli said while racism was not restricted just to Italy and Spain, he accepted it was more publicly prevalent.
Asked whether he had experienced overt racism while playing for City he added: “Not open, no.
“At City, just after I joined, we were on a plane going on tour somewhere and I looked around and I realised there were more black players than white players on the team.
“That was a big difference. That was kind of amazing. In Italy I was often the only one.
“Racism is everywhere. Maybe it is more open here, or in Spain. There are racists in England but I think they hide it more.”
Balotelli felt much more could be done in the battle against racism but did not want to be the one seen to be leading the fight on his own without the formation of a sustainable campaign.
“I know people are fighting this thing, and it’s important, but in the media every time I have talked about this subject people talk about it for three or four days but then everything goes back to normal,” he said.Advertisement

“So, either there is something really strong for all of us to do, some real movement or real action, and in that case I will be the first guy to participate, but if it’s just talk, I’d rather not.
“We can talk about it as much as we want but things don’t change that way.
“When there will be something real and strong to really help people and society, and really help people who have less than me, then I will help.”
Were Balotelli’s goals to fire Italy to victory at the World Cup this summer he would become a national hero, but the striker thinks that would miss the point.
“It’s really sad to think that we can change Italy only by winning the World Cup. I hope we can change things even if we don’t win it,” he added.