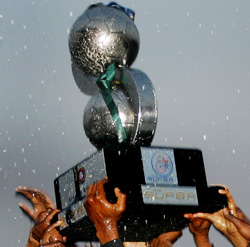 THE BancABC Sup8r Cup will be launched in Harare on Tuesday-a year after it was suspended, sponsors of the tournament have confirmed.
The competition was last played in 2010 when Motor Action beat Highlanders 1-0 in the final at Barbourfields Stadium to take home a cheque of $40,000, but failed to take off last year due to what the bank termed a ‘constrained calendar’.
The eight teams that had qualified for the last year’s event where however, given $15,000 each for their troubles.
Teams participating teams in this year’s tournament are Dynamos, Highlanders, Chicken Inn, Monomotapa, Shabanie, Buffaloes, FC Platinum and Motor Action.
The draw will be conducted at the launch while the Premier Soccer League, which will administer the competition, will decide on the match venues.
“As usual, most of the games will be played at neutral venues and we are targeting places like the Colliery in Hwange, Dulibadzimu in Beitbridge, Mandava in Zvishavane and Gibbo on Triangle.
“Sponsorship has been increased and this will be by far the biggest of all tournaments we have hosted,” a bank’s senior official said on Sunday.
“A number of BancABC’s strategic partners in the corporate world will also chip in and make this year’s tournament a grand one,” said the official.
The final will be played in August after which the Mbada Diamonds Cup will start.Advertisement