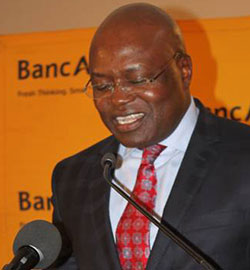 FORMER Barclays Plc chief executive Bob Diamond’s Atlas Mara is set to acquire the remaining 4,2 percent of the pan-African banking group ABC Holdings (ABCH) to complete its take-over, the chief executive said on Wednesday.
Last week Atlas Mara took its shareholding of the group to 95,8 percent and wants to acquire the remainder.
“The plan now is that for the balance of about 4,2 percent, there is going to be an offer that will open very soon so that the 4,2 percent will also be acquired, achieving a 100 percent ownership by the Atlas Mara group,” Douglas Munatsi told journalists and analysts at a briefing on Wednesday.
He said a prospectus will be issued around September 15, after which ABCH will become a private company and would be subsequently delisted from the Botswana and Zimbabwe stock exchanges.
Munatsi said the acquisition had received regulatory approvals from the central bank and other authorities, referring to the process as “very complicated.”
“There is still quite a few other things that need to be done within some jurisdictions but I think, by and large, we are pretty much now at the end of the transactions,” he said.
Munatsi said Atlas Mara would restructure and appoint directors to the board of the group, adding that two candidates had already been announced while the company was currently obtaining approvals.
“We do expect that there is going to be some enhancement of some of our subsidiary boards but there is unlikely to be wholesale changes,” he said.
Atlas Mara, he said, had committed to invest an additional $100 million in the group and the plan was to utilise it to raise the capital levels of its three largest subsidiaries in Botswana, Zambia and Zimbabwe to $100 million apiece.
“We have already complied in Zambia and our plan is to raise BancABC Zimbabwe capital and Botswana to $100m as well. The balance is also going to be used to raise the capital levels of the remaining subsidiaries to at least $50 million each,” he said.
Since it listed on the London Stock Exchange last year, he said, Atlas Mara had raised around $800 million to grow existing businesses including in Zimbabwe and Rwanda.
“From the way we stand as BancABC, this transaction has offered us an opportunity to grow this business in the SADC region and to see how that will link up with the rest of the operations that Atlas Mara will acquire across Africa,” he said.Advertisement

Munatsi said the group was in final stages of negotiating with a number of other funders for $300 million to be concluded before the end of the year.
Asked whether the acquisition by Atlas Mara was in compliance with the indigenisation law which requires foreigners to cede 51 percent shares to black locals, Munatsi said BancABC remained indigenous.
He said as part of the approval by government Atlas Mara would sell between 30 and 40 percent to indigenisation investors, adding that some of the Zimbabweans that held shares in BancABC had swapped them for shares in Atlas Mara.
BancABC Zimbabwe will maintain its corporate identity and structure although the group is expected to comply with the London corporate governance rules, he said.
Atlas Mara combines Diamond’s Atlas Merchant Capital LLC and African entrepreneur Ashish Thakkar’s Mara Group Holdings Limited.
BancABC has presence in Botswana, Mozambique, Tanzania, Zambia and Zimbabwe.