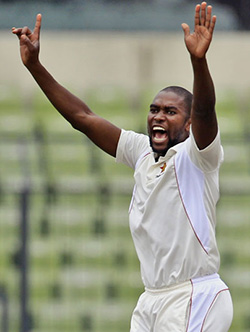 Bangladesh 254 (Mushfiqur 64, Mahmudullah 63, Mominul 53, Panyangara 5-59) and 101 for 7 (Chigumbura 4-21) beat Zimbabwe 240 (Raza 51, Shakib 6-59) and 114 (Taylor 45*, Taijul 8-39) by three wickets
TAIJUL Islam set a national record with an eight-wicket haul and then struck 15 crucial runs to help Bangladesh overcome a spirited Zimbabwe by three wickets Monday in a tense finish to the first cricket test.
Bangladesh reached the winning target of 101 after batting collapses at the start and near the end of the innings.
“Obviously, this feels really good,” said Islam. “I couldn’t do well in the last (first) innings. I thought a lot about it and thought I had to do well because there’s a lot of fight in this team… For me, winning for the team felt really good.”
The 22-year-old left-arm spin bowler was not aware of any records. “I (only) came to know of the record later,” he said.
Islam, who took 8-39 in Zimbabwe’s second innings, then batted with aplomb to guide the home team to victory after it was reduced to 82-7 and under threat of losing.
He stroked the winning boundary off Elton Chigumbura through backward square leg to ensure Bangladesh’s fifth test victory and third against Zimbabwe.
It all happened after Bangladesh made the worst start to a fourth innings in test history when it lost its first three wickets before scoring a run.
Mahmudullah remained calm and was top-scorer in the final innings with 28, sharing an innings-saving 46-run stand with Shakib Al-Hasan to put the hosts back on track, while skipper Mushfiqur Rahim was unbeaten on 23.
Rahim asked reporters to avoid over-praising the record-breaker.
“Many cricketers have performed like this in the past and he will perform like this in the future,” he said. “I have one request — that when a young cricketer performs this way, please don’t do anything that makes him think that he is a big player and he thinks big of himself.”
Chigumbura finished the innings with figures of 4-21 while Tinashe Panyangra had 2-30.
Both bowled with aggression to skittle the Bangladeshi top order after Zimbabwe was dismissed for 114.
Wickets tumbled late in the evening session as Zimbabwe clawed its way back into contention with Chigumbura removing Mahmudullah and Shuvagata Hom (0) in the space of just three balls.Advertisement

But Islam held his nerve, helped by Rahim’s composed innings.
“I think this win is a big deal because, for a team like us, we don’t get too many wins,” said Rahim. “And we lost a number of matches this year despite going so close so we are happy that we managed to hold our nerve till the end… We overcame.
“So this was a plus point. We wanted to win and overcome and that has happened. The way we won, we didn’t expect.
“We are not where we want to be but the boys played very well and a win is a win,” Rahim said. “There are a lot of areas to improve on in both batting and bowling. To win tests you have to play big innings to make it count.”
It was Bangladesh’s first win this year against a test nation. In the last 25 International matches, the Bangladesh team had just two wins against ICC associate teams — Nepal and Afghanistan in Twenty20.
Earlier, Islam returned Bangladesh’s best ever single-innings figures, beating the 7-36 by fellow left-arm spinner Shakib Al Hasan against New Zealand at Chittagong in 2008.
It was Islam’s second career five-wicket haul after his 5-135 on debut against the West Indies in September.
“Thanks to everyone who supported me – captain, support staff. I’ll try to get better in the future,” he said. “I only wanted to support (Rahim) in the test and didn’t want to do anything wrong.”
Zimbabwe captain Brendan Taylor said: “At the end of the day, we batted badly and did not deserve to win. There are still two more matches so it’s not gone. The momentum may be with them, but we showed we can fight.”