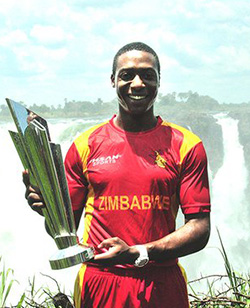 Bangladesh made a winning start to 2016, cruising past Zimbabwe by four wickets in the first of their four Twenty20 internationals on Friday. Zimbabwe rode a 101-run partnership between Hamilton Masakadza and Vusi Sibanda, their highest opening stand in T20s, to pile up 163 for 7. Bangladesh eclipsed it with 166 for 6 and eight balls to spare.
“We could have finished the game in 17 or 18 overs had we not lost the wickets at the start, and then Mushfiqur and Sabbir in quick succession, but Shakib played his part nicely,” Bangladesh captain Mashrafe bin Mortaza said.
Bangladesh had 31 up in the fourth over when Soumya Sarkar, back in after missing the last series against the same opponent, was run out after a mix-up with Tamim Iqbal. Tamim shook it off and plundered the bowlers with 29 off 24 balls before he was out in seventh over. Sabbir Rahman then took the anchor role, and was supported by Mushfiqur Rahim, who made 26 off 19, sending the ball across the rope three times.
Zimbabwe raised hopes of clawing back, dismissing Sabbir after he hit 46 off 34, with four boundaries and one maximum, at 118-4. But Shakib Al Hasan held his nerve to seal the victory with an unbeaten 20 off 13, with two fours.
Legspinner Graeme Cremer returned 2 for 32. Zimbabwe put up a decent total thanks to Masakadza, who smashed 79, equaling his highest score in T20s. He clobbered two sixes and nine fours. Sibanda added 46.
“I thought we missed out on 15, 20 runs in the end. We were looking at least 180,” Masakadza said. “At the end, you can look at little things like that but I thought if we were defending 180 it would have made a big difference.”
Shakib Al Hasan made the breakthrough for Bangladesh, removing Sibanda, who survived a catch in the preceding delivery. On the boundary, Soumya Sarkar did well to catch out Sibanda, but video replays showed his foot touched the boundary rope. Sibanda earned a six, but he sliced the next delivery to Tamim.
Sibanda’s dismissal stemmed the run flow for Zimbabwe, which faltered near the end, losing five wickets for only 31 runs in the last five overs. Malcolm Waller (14) and Masakadza were run out in quick succession, and Bangladesh pacers Mustafizur Rahman and Al-Amin Hossain choked Zimbabwe with superb fast bowling. They took two wickets each.Advertisement

The second match is on Sunday.