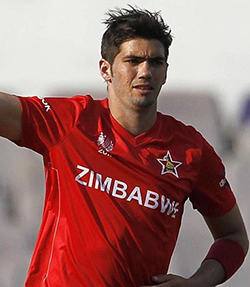 DHAKA: Bangladesh cruised to a comfortable eight-wicket victory over Zimbabwe in the opening tri-nations campaign on Monday, overtaking the visitors’ meagre total of 170 with overs and wickets to spare.
Tamim Iqbal struck an unbeaten 84 to lead the chase as Bangladesh reached 171-2 in 28.3 overs after left-arm spinner Shakib al Hasan gave the team early momentum with two wickets in the opening over of Zimbabwe’s innings.
Shakib finished the day with 3-43 and he also scored 37.
‘I think losing two wickets inside the first over shifted the momentum,’ Zimbabwean skipper Graeme Cremer told reporters after the match.
“We have got a couple of starts but could not make them count,’ he added.
Sikandar Raza top-scored for Zimbabwe with 52 and he added 50 runs with Peter Moore(33) to help them past 150.
Tamim, who hit eights fours and a six, lost his opening partner Anamul Haque (19) early but added 78 with Sakib for the second wicket to set up the victory for Bangladesh.
Bangladesh will face Sri Lanka in their next game on January 19.Advertisement