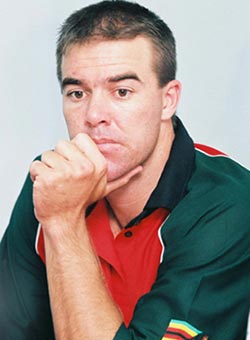 FORMER Zimbabwe captain Heath Streak has been named Bangladesh’s bowling coach.
Streak’s contract will bring 450 days of work across two years – and will include a consulting role with the Bangladesh Cricket Board’s other representative teams.
The veteran seamer, who played 65 Tests between 1993 and 2005, was Zimbabwe’s bowling coach between 2009 and 2013.
“I look forward to the challenge of working with the Tigers and thank BCB for the opportunity,” said Streak.
“It is exciting for me to be back into the international coaching arena again. It is my passion to coach at an elite level and I hope I can bring my experience as a former player and coach to the Bangladeshi bowlers.”
Bangladesh recently appointed erstwhile Sri Lanka batsman Chandika Hathurusingha as head coach – and hired ex-Test coach Sarwar Imran as Hathurusingha’s assistant.
The trio’s first assignment will be a brief tour of India in June, which will bring three ODIs at the Shere Bangla National Stadium in Mirpur, Dhaka.
A tour of the West Indies – for three ODIs, a one-off T20I and two Tests – will follow in August and September.Advertisement