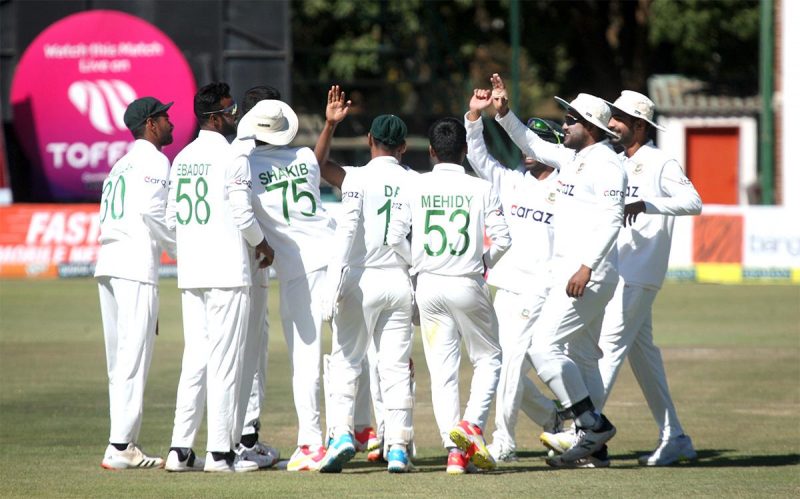 ZIMBABWE allrounder Donald Tiripano scored a defiant half-century, but it was not enough to save the hosts from an embarrassing 220-run defeat in the one-off Test at Harare Sports Club Sunday which gave Bangladesh their first-ever Test series win in the country.

Tiripano fought a lone battle for Zimbabwe by scoring his second fifty in Tests, but his resistance ended on 52.

Resuming the day on 140 for three while chasing 477 runs for an unlikely win, the hosts appeared to have done well to give themselves a chance of saving the match when Tiripano and Dion Myers survived the first hour on the final day unscathed.

Zimbabwe were, however, their worst own enemy as they lost four quick wickets soon after the drinks interval, with the duo of Timycen Maruma Roy Kaia, failing to score in both innings of the match.

Thereafter, it was just a matter of when and not if Bangladesh would complete their first-ever series win in Zimbabwe.

Tiripano delayed Bangladesh’s victory celebrations when he and fast bowler Blessing Muzarabani, who finished unbeaten on 30 formed a 41-run partnership off 13.4 overs to frustrate the visitors.

But when he was the ninth wicket to fall, Zimbabwe went on to be bowled out for 256 in their second innings as Bangladesh claimed victory by 220 runs just before tea on the fifth day.

Bangladesh spinner Mehidy Hasan Miraz was impressive in conditions that were expected to favour the fast bowlers as he claimed four wickets for 66 in the Zimbabwe second innings for nine wickets in the match.

Zimbabwe will look back with regret as they did not take their opportunity early in the match when they had Bangladesh in trouble at 132 for six in its first innings at the start of the Test.

However, an unbeaten 150 from Mahmudullah Riyad, batting at number eight turned the Bangladesh innings around as the tourists reached 468 all out before dismissing Zimbabwe for 276 which gave them a first-innings lead of 192.

The visitors then declared their second innings on 284 for the loss of one wicket to set a mammoth target of 477 which Zimbabwe never looked like reaching despite Brendan Taylor’s quickfire 92 from 73 balls and Tiripano’s half-century.

The teams will now contest a three-match One-Day International series starting on Friday, which will be followed by three Twenty20 matches.