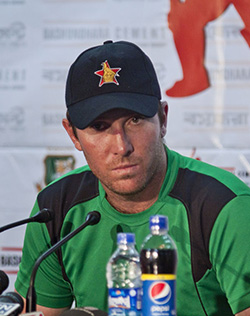 NOBODY likes to be last. That adds extra spice to the three-test cricket series between Bangladesh and Zimbabwe beginning at Sher-e-Bangla National Stadium on Saturday.
In the 10-team test rankings, Zimbabwe is ninth, and Bangladesh 10th. Whoever loses the series will be 10th.
“The ranking issue is there but more than that we are focusing on the test series,” Bangladesh captain Mushfiqur Rahim said.
“We are working on our processes. If that is allright, the result and everything else will be OK. The basic things should be right, and that’s the main thing.”
The basics haven’t been right for Bangladesh this year, having won only two of 25 internationals.
The worst was the World Twenty20 in March-April when, what should have been a celebration as host, Bangladesh lost to Hong Kong in the preliminaries and was thrashed in all four group matches.
They still haven’t won a game, including a limited-overs visit by India and a tour of West Indies.
In July, star allrounder Shakib Al Hasan was suspended for a “severe attitude problem,” but was cleared last month to return to the team.
His spin, alongside new legspinner Jubair Hossain and raw left-armer Taijul Islam, is expected to be a key to Bangladesh’s hopes.
But Shakib’s batting might be more important in a brittle lineup.
“Hopefully he will give his best,” Rahim said.
“Our main focus will be to bat well, as we have a good enough bowling attack to take 20 wickets at home. We need a win, and we have worked hard or done everything possible for that, on the field and off. Hopefully it will work out.”