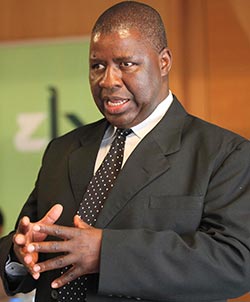 ZB Bank on Thursday launched a $1 million loan facility for informal traders as the group seeks to increase its presence in the sector employing most adult Zimbabweans.
It is estimated that about 60 percent of Zimbabwe’s adult population is employed in the informal sector, which constitute about 85 percent of the business economy.
While the formal economy is suffering from shortages of cash, it is believed that the bulk of money in the country, over $7.4 billion is circulating outside the formal banking channels.
According to a recent survey, 43 percent of small business owners are excluded from the mainstream financial system while 50 percent use informal mechanisms to manage their business finances.
The ZB fund is targetted at informal traders who would have to open an informal traders account with the bank. The traders can borrow up to $500 over seven days.
“The account is virtually free banking,” said acting managing director Shadowsight Chiganze at the launch.
The bank has signed a memorandum of understanding with Harare Home Industries Association at Siyaso, Mbare in Harare for access to the fund.Advertisement