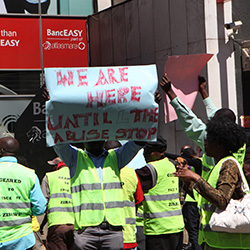 HARARE: Banking workers on Tuesday picketed the BancABC offices in Harare’s Central Business District, protests over its treatment of retrenched former employees.
BancABC dismissed 75 employees in 2015, taking advantage of a July 17, 2015 Supreme Court ruling which makes it easier to dismiss employees without severance pay, sparking demonstrations.
The Zimbabwe Banks and Allied Workers Union (ZIBAWU) president, Farai Katsande told The Source that the bank had started attaching properties of the dismissed workers to recover loans, leading to over 200 Zibawu members protesting on Wednesday.
“We are saying that the bank must revise the way it compensates those employees,” said Katsande.
“It should move away from the legislated two weeks for every year served and give them something reasonable because the loans that they had contracted during their employment life totally outweigh the packages that they were given. As a result the bank is now litigating (against) the same employees.”
He added: “The bank should find a way of making it easy for the employees to pay back rather than taking them to high court like it is today.”
The union also petitioned parliament portfolio committee on public service, labour and social welfare to abolish the statutory retrenchment package.
“We call on this portfolio committee to immediately cause changes to the Labour Act by reinstating collective bargaining in retrenchment processes” the protesters said in a petition which they plan to hand over to the committee on Thursday.
The workers have planned another demonstration on September 7.Advertisement