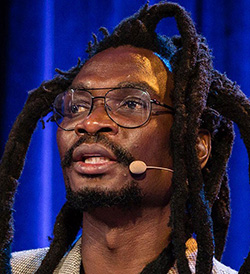 BANNED Gukurahundi arts exhibition, Sibathontisele (Let’s Drip On Them), by Bulawayo based visual artist, Owen Maseko, has found a new home in Kenya.
The exhibition will be showcased at the Goethe-Institut Auditorium in Nairobi, from April 13 to May 5, 2017.
The controversial exhibition, depicts a sad chapter in the Zimbabwean narrative, where 20 000 civilians from Matebeleland and Midlands provinces, were brutally murdered, in what has become known as the Gukurahundi atrocities.
The exhibition only showcased for less than 24 hours in March 2010 at the National Gallery in Bulawayo before it was shut down by police.
Resultantly, Maseko was arrested and charged with undermining the authority of, or insulting the president and causing offence to persons of a particular race or religion.
The then Acting Director of Bulawayo Art Gallery Vote Thebe, was also arrested together with Maseko but was later freed.
The case was subsequently referred to the Supreme Court in 2013.
Since 2010, the whole ground floor exhibition space at the gallery where the exhibition was put up was cordoned off as some of the images and graffiti were painted directly on the walls.
The exhibition was only removed in 2015, following an order from the Supreme Court.
In February 2016, Maseko took his exhibition to South Africa where it was showcased for a month at the Open Society Initiative for Southern AfricaÂ (OSISA) offices in Johannesburg.
“Almost 30 years after the guns fell silent, the government has urged Zimbabweans to ‘move on’ from the period Mugabe described as a ‘moment of madness’.
“The majority of those affected still feel that the issue still needs to be adequately discussed before it can be consigned to history,” said Maseko, in a brief outline of the exhibition.
The government has been accused of using the Censorship and Entertainment Control Act, to ban art works deemed to be too critical of the Zanu PF led government. Advertisement