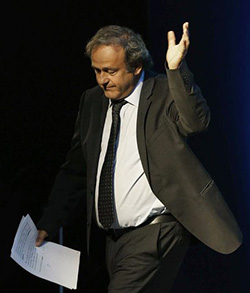 PARIS: Still trying to clear his name, Michel Platini has taken his appeal against a ban from soccer to the European Court of Human Rights.
Platini, the former France great who was banned by the FIFA ethics committee for financial wrongdoing while he was running for president of the world soccer body, told The Associated Press in an email that he wants his suspension lifted.
The former UEFA president was initially banned for eight years in December 2015. The ethics committee ruled he was not entitled to $2 million in backdated salary that he was paid in 2011 for working from 1998-2002 as adviser to then-FIFA President Sepp Blatter.
That suspension was cut to six years by the FIFA appeals committee, then to four by the Court of Arbitration for Sport. But the 62-year-old Frenchman last month took his case to the French-based court in Strasbourg.
“I want justice back. I haven’t done anything wrong,” Platini said in the email. “I want my integrity to be acknowledged. With this plea to the European Court of Human Rights, I am contesting all of the sanctions from FIFA and CAS. I will not give up.”
In July, Switzerland’s supreme court dismissed an appeal by the former FIFA vice president against the four-year ban imposed by CAS.
Platini and Blatter claimed they had a verbal agreement over the lump sum but were banned by FIFA for a conflict of interest. The evidence included Blatter’s attempt to increase Platini’s FIFA pension fund with more than $1 million he was not entitled to.
The case removed Platini from the UEFA presidency and the February 2016 FIFA election to succeed Blatter.
“I consider myself to be a victim, not only of an injustice, but also a political conspiracy by FIFA to stop me becoming president of this institution,” Platini said. “I was a threat for the positions, the interests and the privileges of many people in FIFA.”
Platini, a celebrated midfielder with France and Juventus during his heyday as a player in the 1980s, is suspended until October 2019.
“I am fighting first of all for my honor and against injustice. I want my innocence to be recognized, that’s my absolute priority,” Platini said. “For the moment I don’t know what I’ll be doing after October 2019.”
Platini said he has been approached to do television work for this year’s World Cup in Russia, but is not in a position to accept.Advertisement

“I have received some offers for the World Cup,” Platini said, “but I remind you that I’m banned from working in football by FIFA.”