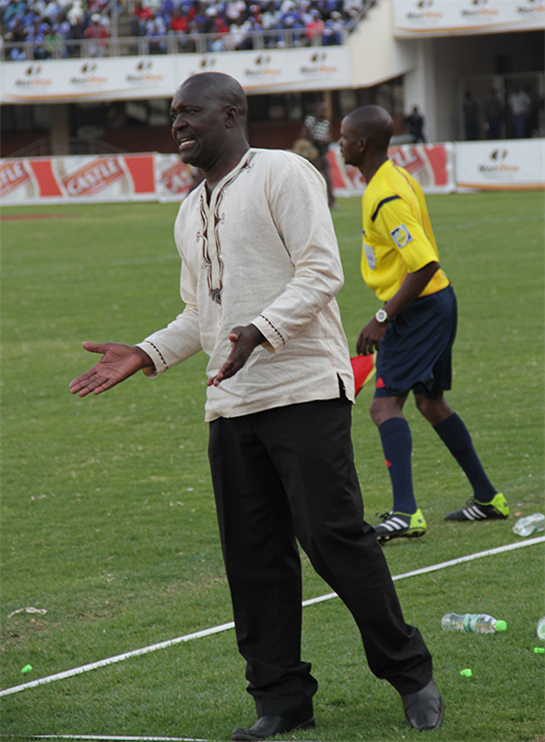 DESPITE allowing their Castle Lager Premier Soccer League lead to be trimmed to a point after Sunday’s 0-0 draw with Bantu Rovers, Highlanders coach Kelvin Kaindu feels his charges are now better than they were in the first half of the campaign.
It was a slow start for the Bulawayo giants who kicked off the second half of the league by dropping two points against a Rovers side they had dismissed 4-2 three weeks earlier.
On Sunday, Kaindu’s men huffed and puffed all afternoon, failing to break down Rovers who played the better part of the match without coach Methembe Ndlovu who had been ejected from the technical bench for remonstrating with referee Bekezela Makeka.
Rovers’ defender Herbert Dick committed the same offence as his coach towards the conclusion of the match and was red-carded.
But Highlanders still failed to find a goal.
Kaindu is not worried by the draw, and is drawing positives from the match despite affording closest rivals Dynamos and ZPC Karina a chance to close the gap to just a point.
“The game was well balanced. It was a 50-50 affair,” Kaindu said.
“We had our chances and failed to convert. We could have won it because we dominated the first half where we should have killed off the game.
“But I think we are now an improved side than what we were in the first half of the league. We have to continue with that momentum and end the season on a better position.”
Kaindu is chasing history to bring the league title to Highlanders for the first time since 2006.
Elsewhere, Caps United coach Taurai Mangwiro said his side deserved to win the Harare derby against old foes Dynamos on Sunday.
United blew up a first half lead to allow a Dynamos comeback and lost 2-1.

The defeat ensured them to start next season without beating Dynamos for six years in the league.
Tendai Samanja had put them ahead early into the match but Washington Pakamisa and substitute Russel Madamombe handed Dynamos three points.
“We played well and everyone saw that. We deserved to win,” Mangwiro said.
“Just look at the number of chances we missed in the first half. That is when we should have wrapped up the game but we failed. The boys however gave it their all.Advertisement

“We fought hard and that should have given us the three points. We lost concentration in the second half but the match was for us to win.”
Mangwiro’s side remain on number four on the log with two points behind Dynamos.