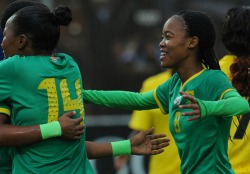 A 61st-minute wonder strike by Refiloe Jane was the difference as Banyana Banyana beat their Zimbabwean counterparts 1-0 at Makhulong Stadium in Tembisa on Sunday afternoon.
Jane received a cross from Lebogang Ramalepe midway through the second half and rifled home a low shot that gave Lindiwe Magwede in goals for the visitors no chance.
Despite few scoring chances, Banyana coach Vera Pauw must have left Tembisa a happy individual with the type of the workout from her charges ahead of their trip to Netherlands in two weeks’ time.
Banyana play two friendly matches in Holland on June 4 and June 7 in what would be a stern test for the Olympics-bound Banyana.
The home side went on the attack from the word go and in the 12 minute Sanah Mollo went on a mazy run, but her tantalising cross found no takers inside the box when the Zimbabwe defence was at sixes and sevens.
It was in the opening stanza in which Amanda Dlamini, who later on fizzled out of the game, Linda Motlhalo and Mollo asked all sorts of questions, but very little clear-cut chances came either side.
Mollo could have done better on the 36th minute when she found herself face-to-face with Magwede, but she delayed to take the shot before the visitors cleared the danger.
At the stroke of half-time, Mollo again was at fault when she took too long to pull the trigger and was eventually dispossessed.
Mpumi Nyandeni’s long-range shot soon after resumption was well saved by Magwede, but nothing was going to stop Jane from stealing the show and scoring the winner just past the hour-mark.Advertisement